Playing With No 'Bench'

Jump Ball No. 59.By Arlington James 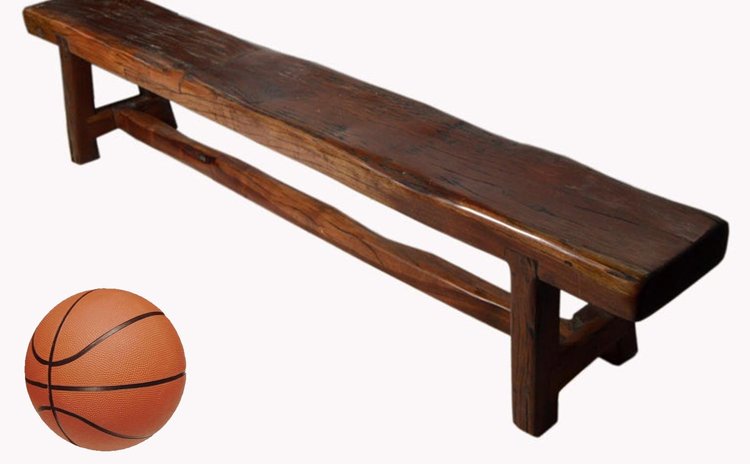 A basketball game cannot begin with less than five players from each team on court, ready to play. However, once the game has started a team may continue to play until as few as two players remain on court.

A basketball team sometimes comprises a high player/substitute ratio, i.e. up to 5:7, and these individuals are all referred to as 'players' before the start of the match. However, once the 'starting five' has been named these five players who are entitled to begin the game are referred to as 'players' - until their status changes – and those remaining are categorized as substitutes, or 'subs'.

There have been instances in basketball games in Dominica where a team, while enjoying a substantial lead over its opponents, would send in a fresh five to continue the massacre as there is no limit to the number of substitutions that can be made by a team at any time, of course within the limits of the laws of the game.

Have you ever played, officiated, or were a spectator at a basketball game where one team came to the ball park with only 'one five', i.e. with no substitutes, and played a 'suicide' game.

It turns out that in such instances the players on the 'one-five' team usually play a fairly good brand of basketball, though sometimes tiring. And while that team may not necessarily win the particular game, in some instances none of those players ends up exiting the game with 5 fouls as they all try hard to avoid fouling unnecessarily.

Some important items of furniture are required for an official game to be played. Firstly, the Table Officials (and Statisticians if available) must be comfortably seated, and be provided with one or two tables for the scorer and time-keeper, as well as the statisticians. And of course, each of the competing teams must be provided with its own 'bench', which in Dominica's case, is usually a long, wooden bench.

However, 'bench' may also refer to the set of substitutes for a particular team.

But, have you ever played, or officiated, or viewed from the spectator stands, a game where both opposing teams were in fact 'one-five' teams, i.e. the total number of subs on the benches combined equaled zero?

Actually, this happened in a senior division game of the Dominica Amateur Basketball Association late in June 1994, when Blazers from Massacre met Wolverines from Bath Estate. Both teams boasted national players in their line-ups, although Blazers' and Dominica's star player Ashworth Daniel had been sidelined due to a previous injury that put him off the game for some time.

According to The New Chronicle of 1st July 1994, "ACS Wolverines pulled off a one-point [win] over SAG Toyota Blazers in a match last Saturday night when neither team had a bench" (emphasis mine). That match saw Wolverines clinching Blazers 87-86 (38-42), with the teams chalking up a hefty combined score of 173 Pts.

Blazers had enjoyed a 4-Pt lead at the half but it appears that they relaxed somewhat in the second half, scoring 44 points to Wolverine's 49 to allow for a 5-point turn-around and suffering a 1-point loss.

Overall, 7 of those ten players each scored 10 or more points, including three who each netted at least 20.

Leading the scoring in that 'double-suicide' encounter was Blazers' Donnie Robinson with a massive 42 points. Donnie alone scored 48.84% or almost half of his team's total in a losing effort.

Answering from the winners, but certainly not as loudly, was Danny Joseph who sank in a reasonable 24 Pts; his score equated to 27.59% of his team's total.

Also high-scoring for Wolverines in that match were Davis 'DJ' Joseph, Carlisle Green and Phillip 'Kawé' McDougal with 20, 16 and 12 Pts respectively. Meanwhile, at the other basket Jeffrey 'Big Buba' Joseph got 19 Pts and J. Taly 10 for Blazers.

Unfortunately, game statistics such as fouls, turn-overs etc. are not available for that encounter from a quarter-century ago. That said, however, a few questions must be asked about that high-scoring affair. For starters, what was the combined number of fouls committed by the teams?

Did any of the ten players foul-out? What was the quality and intensity of the defence employed that those teams' scores would each have approached 90 points? Was it a case of high-percentage shot-conversion by both teams, or just that both opponents were somewhat tentative in their defence? Well, it's anybody's guess.

Now, who will come off the bench for the next match?