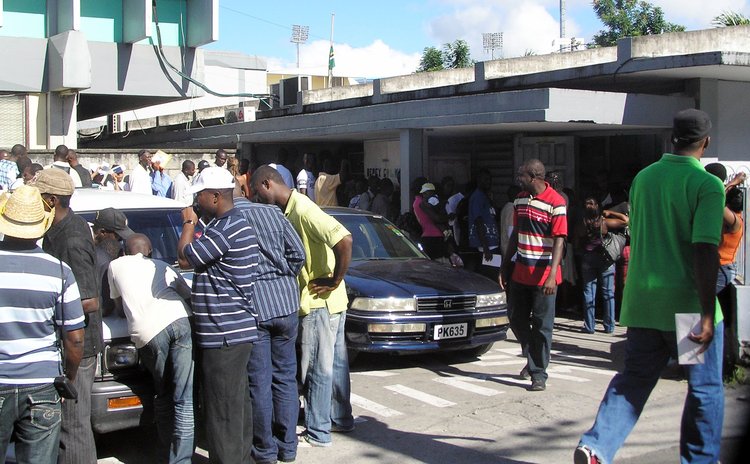 Pay a visit to the Roseau market on a Saturday morning and you can't help but feast your eyes on the attractive arrays and colourful displays of produce. The vendors blend in perfectly, their faces merge, the language is familiar, but the accent is distinct.

"Half of the vendors at the market are Haitians," observed the economist McCarthy "Mark" Marie. The numbers could not be immediately verified – the Roseau Market Authority advised that it needed a week to get us the information – but you get the picture.

Take a walk along Independence Street in Roseau and you can take your pick among the many barber shops that line the main artery into the city. The barbers seem local, the atmosphere is conversant, but the music is patent.

"You go into those barber shops, you listen to the music, it's Haitian music, Haitian patios is spoken. You walk in there and you know it's a Haitian business," noticed Athie Martin, the agriculturist and hotelier.

It's not immediately known how many Haitians make Dominica their home – legally or otherwise – but what is clear is that you can feel their presence everywhere, from culture to agriculture.

Opinions are divided on how welcome they are here, with a large number of Dominicans who comment on the blogs making no secret of their disdain for those who chose to escape poverty in the French-speaking country of over 10 million people.

"Too many Haitians in Dominica," someone whose online name is Happy to Hear posted on a blog in January.

"Dominica need (sic) to stop importing Haitians!!!...stop them people there's too many of them they will become the Mexicans of Dominica and overpopulate the country with their illegal activities," added a poster named "DOHREADYET".

At the heart of this searing dislike is the trafficking in humans in which an indeterminable number of Haitians are involved. An unspecified number enter the country legally and are smuggled out, choosing to lose the US$400 that they must deposit upon entry into Dominica. So severe is the problem that earlier this year, the government announced that it would suspend visas to Haitians. The issue has also led to tension between the prime minister and the labour commissioner, Matthew LeBlanc, who wrote a stinging 18-page memorandum about the visa approval process to the Dominican leader earlier this year, containing various elements of accusations, intrigue and meddling .

"The human trafficking thing (is a negative).You have thousands and thousands of people who get visas to work in agriculture that very few do," Marie told The Sun.

This remains a vexing issue that leads to distrust of Haitians. However, Marie argued that the positives far outweigh the negatives.

"If the Haitians would suddenly disappear for some reason the economy would take a hit," Marie said, citing the number of local businesses that cater to this growing population. "Many places you go, like the money transfer businesses, whatever information, (it) is also written in creole. The telecoms companies, the Haitians are big business to them so you will see advertisements offering specials on calls to Haiti. So the Haitians have a very positive influence on the economy," he concluded.

Few, if any, understand this impact better than Roland Desir, the former president of the now inactive Dominica Haiti Friendship Association. Mr. Desir has been living here for 18 years, has obtained Dominican citizenship and currently manages Chez Ophelia, the eponymous cottage apartments located at Copt Hall Estate in the Roseau valley. Desir also does computer repairs.

"We have a huge and great impact on the economy of the country," he told The Sun in a telephone interview.

The presence of Haitians in security uniform has become a regular sight at many local businesses – at least one has established his own security firm – and barbering is quickly becoming the occupation of choice for many of them.

However, the greatest impact of the Haitian presence is felt in the agricultural sector. Not afraid of getting their hands dirty, they have picked up the slack caused by the declining numbers of Dominicans who get into agriculture. You see evidence of this at the Roseau Market on a Saturday morning.

The Roseau Market Authority which registers vendors who ply their trade at the market could not make the numbers immediately available. However, Desir told The Sun that the Haitians' involvement in agriculture is benefitting the country.

"We are basically (involved in) agriculture…and right now, because of the Haitian presence you have a flow of products that have become always available on the market. Before it was seasonal, but now it's all around the year. Haitian working on the farm, we plant, we grow food and we sell," Desir explained. "And the great thing about it is as we have a great impact on product, the price goes down so it benefits everyone."

The proof lies at the Roseau Market.