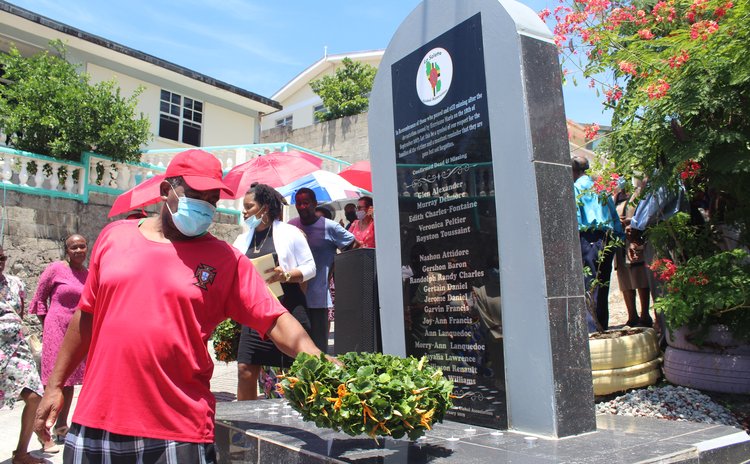 Pointe Michel was ground zero when category five Hurricane Maria made land fall in Dominica on 18 September 2020. Seventeen people died there, more than 50% of Dominica victims of the hurricane.

In Pointe Michel on Sunday, three years after the hurricane, tears flowed and emotions were high as the names of the men, women and children who perished were called during a memorial service.

In a message read at the service, Nigel Lockhart, the President of the La Salette Global Association, an organization formed to commemorate Hurricane Maria's impact on the village, said "remember and never forget those who perished."

Read by representative Roanna Joseph, Lockhart's message added that the memories of September 18, 2017 "will never go away" but it is important that the people of Pointe Michel do not make the day "a sad one."

"Let us rejoice and remember our family members who passed on. The joy that they brought to our lives and the love that they shared with us…let us promise to be one village, one people, one community and one Dominica," he said.

Meantime, local representative Roanna Joseph who chaired the brief function where a monument inscribed with the names of the people who perished in the Sibolie ravine was unveiled, said September 18, 2017 was very difficult to forget.

"We must remember all those who called out for help and were never heard and those and never got a chance to cry out for help and were swept away," she said. "To date, many of our family members are still missing and so we must remember them and pay respect to them." As the names of the dead or missing were being read, families laid candles and wreaths near the monument. And they wept.

Chairperson of the Pointe Michel Village Council Erica Lewis-Jules read a brief statement on behalf of parliamentary representative Denise Charles who was unable to attend the function because of a previous engagement.

Ophelia Marie, Dominica's Lady of Song, who was raised in Pointe Michel, sang "My Life is in Your Hands" and also laid a wreath.

On Friday, the Government of Dominica hosted a virtual Hurricane Maria remembrance ceremony.

Hurricane Maria was a deadly Category 5 hurricane that devastated Dominica, St Croix, and Puerto Rico in September 2017, Wikipedia states. It is regarded as the worst natural disaster in recorded history to affect those islands and was also the deadliest Atlantic hurricane since Jeanne in 2004.

Maria was also the tenth-most-intense Atlantic hurricane on record and the most intense tropical cyclone worldwide in 2017.

Originating from a tropical wave, Maria became a tropical storm on September 16, east of the Lesser Antilles. Highly favorable environmental conditions allowed the storm to undergo explosive intensification as it approached the island.

The hurricane reached Category 5 strength on September 18 just before making landfall on Dominica.

Maria wrought catastrophic devastation to the entirety of Dominica, which suffered an island-wide communication blackout. Much of the housing stock and infrastructure were left beyond repair, while the island's lush vegetation was practically eradicated.