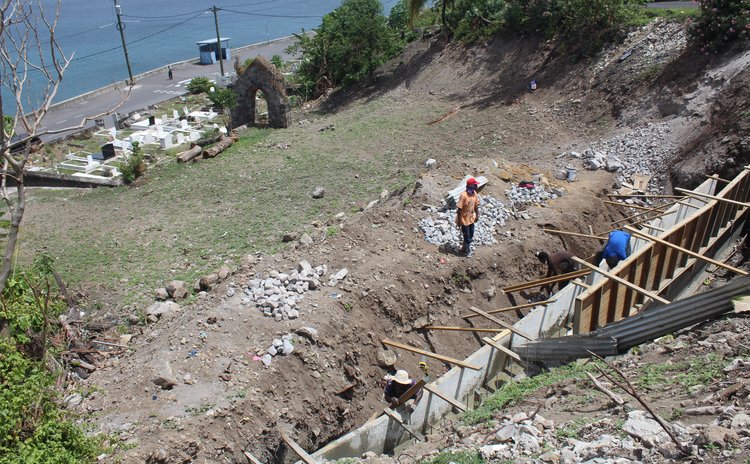 In early 2014 the Sun reported that the Department of Environmental Health (DEH) was concerned about the management of many cemeteries around the island including the Pointe Michel cemetery.

The DEH had closed the Massacre cemetery because gravediggers were inadvertently digging up partly decomposed bodies to bury new ones.

Environmental health officials confirmed to the Sun that they had written to the Ministry of Community Development asking that the cemetery at Massacre to be closed in the best interest of public health.

That cemetery was the burial ground for Catholics in Mahaut, Canefield, Massacre and surroundings areas and according to environmental health officials the use of that burial ground over the years has been "poorly managed" posing a serious health hazard to persons in that community.

Environmental health officials also expressed concern about the usage and management of the Pointe Michel Roman Catholic cemetery now say they are satisfied with its management. But space for the dead in Pointe Michel continued to be a vexing issue for the Catholic Church. Recently, it has decided to address the situation but reclaiming land for the expansion of the Roman Catholic cemetery.

"As you know we have a space issue at our cemetery and so I have decided to do an expansion because we have the land," he said. "It is costing us lots of money and we need to thank villagers and business places who have come together to make it happen. The excavation work cost us over $10,000, then we have to build this wall to deal with the water."

Fr.Wamutitu has estimated that the project will cost $40,000.

"We have gotten help from the parliamentary representative, also Mr. E. H. Charles and the many volunteers in the communities who have taken the project as their own," he said.

On completion, the church expects that space for more than 100 graves will be available.

"What we are going to do is to make tombs whereby you can bury at least three people. So we will be making it a family affair and this will deal with the space shortage that we now have," Fr. Peter Wamutitu said.

Meantime, members of the Mahaut community has started using the new site provided by the Nassief family.

"We are much better now as it relates to space…we have Mahaut and Massacre so that will now assist us greatly," one resident who was involved in the matter told the Sun.