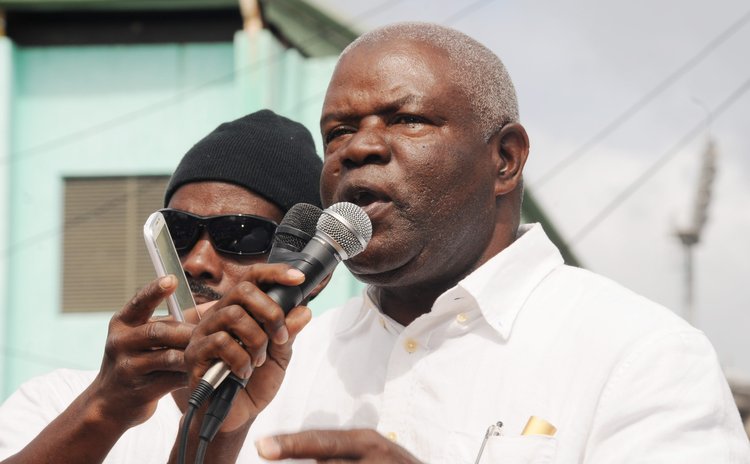 While Chief Daniel Carbon has asked for the cooperation of the public as the police investigate the violence that erupted in Roseau on the night of 7 February 2017, members of the opposition United Workers Party (UWP) say the Government of Prime Minister Roosevelt Skerrit is harassing them about a bogus coup.

"The intimidatory arrests stem from a peaceful public meeting on February 7th in which a large portion of the Dominican population supported the call of the parliamentary opposition for the resignation of the Roosevelt Skerrit-led administration," the UWP said in a press statement. "Since then party members became the target of arrests by the police".

At the meeting and elsewhere,the UWP has called for Prime Minister Roosevelt Skerrit's resignation because of the recent arrest of Alie Reza Monfared, an Iranian who held a Dominican passport and who is facing trial for matters related to the swindling of US $2.8 billion from illegal sale of Iranian oil.

As part of an investigation into the violence, police officers arrested Senator Dr. Thompson Fontaine on Sunday, 12 February, 2017 and released him five hours later. He returned to the police for further questioning on Monday and was released. He was charged for obstruction during the 7 February meeting.

On Wednesday, Claudius Sanford, former deputy political leader of the UWP was also arrested, at 5.30 am, questioned for most of the day and was released 11 hours later.

Today, Johnson Boston, the secretary of the Dominica Freedom Party (DFP) was also questioned by the police; he was released without charge. Boston participated in the 7 February meeting.

Dr. Fontaine and the other detainees were part of a protest meeting held on Tuesday 7 February against the government's management of the Citizenship by Investment (CBI) programme and the issuance of diplomatic passports to persons who later ended up on the wrong side of the law.

One day after the protest meeting, in an address to the nation Prime Minister Roosevelt Skerrit accused the opposition of plotting a coup against his government. The opposition scoffed at Skerrit's accusation.

Throughout the following weekend there were rumours that the police were out to arrest leaders of the UWP including Dr. Fontaine and Lennox Linton, the leader of the opposition in Dominica's parliament.

So far, Linton has not been arrested.

On Wednesday, Commissioner Carbon justified the arrests by saying that the police have a legal obligation to investigate the violence of 7 February, 2017 in Roseau.

"We have to do the job without any favor, malice or ill will. We are obliged, we are compelled by law to do that part of the work, we must investigate. "There are people who must be interviewed and they will be brought in for interviews and the investigation is in process. And once again, I am asking the people to support the police, provide the police with any information that they can give and let the process move forward".