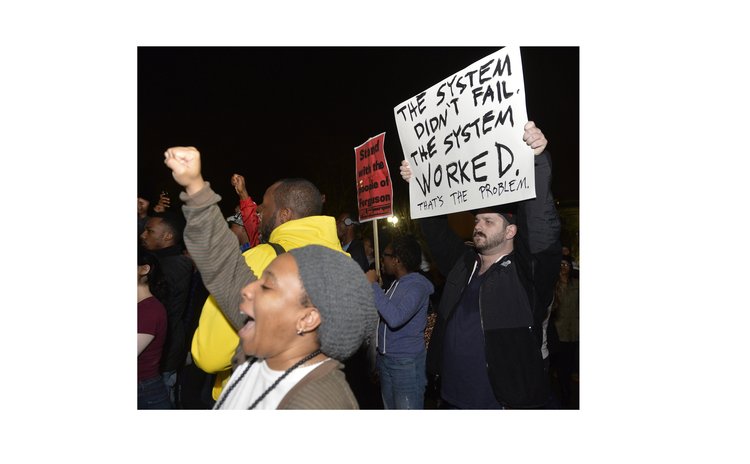 After an "exhaustive review" and examining the physical and scientific evidence combined with the witness statements, the grand jury concluded that Wilson is authorized to use weapons, and therefore has decided not to indict him, St. Louis County Prosecuting Attorney Robert McCulloch said.

Hundreds of people gathering outside the Ferguson police station reacted with anger and dismay when heard of no indictment for Wilson.

Shortly after the verdict, President Barack Obama made a statement, calling for peaceful protests. He said, this is a grand jury decision, "we need to accept," and "there is never an excuse for violence." He asked protesters to show restraint.

Schools in Ferguson will be cancelled on Tuesday.

The announcement of no indictment has been widely expected for weeks after multiple leaks said that there is evidence showing Brown assaulted Wilson inside his patrol SUV and tried to take his gun.

Consisting of three blacks and nine whites, or seven males and five females, the Grand Jury for Wilson's case convened in August. In Missouri, the grand jury does not need to be unanimous to indict, but the decision should be supported by at least nine of the 12 jury members.

The National Guard has been called in to secure critical buildings in St. Louis, including the prosecutor's office building.

Crowds of people stood on Ferguson streets waiting for the grand jury decision. Local media reported that there is a fundamental distrust of the process.

Thirty eight percent of whites say Wilson should not be charged, while just 15 percent of non-whites hold the same opinion. But most Americans agree that Wilson should at least face some form of criminal charges, the poll finds.

Witnesses and police have conflicting accounts of Brown's death. Police said Brown struggled with Wilson inside his police car and reached for Wilson's weapon, while Brown's family and some witnesses said Wilson killed Brown as he raised his hands in surrender.

This is the most controversial case in the United States, CNN said.

To prepare for possible unrest or violence, Missouri Governor Jay Nixon declared a state of emergency on Nov. 18 and activated the National Guard as a precaution.

To protesters, Holder said, "History has shown us that the most successful and enduring movements for change are those that adhere to nonaggression and nonviolence."

Brown's father on Nov. 20 also called for calm ahead of the decision from a St. Louis County grand jury, saying "No matter what the grand jury decides, I do not want my son's death to be in vain - I want it to lead to positive change."