Police officers to be tried 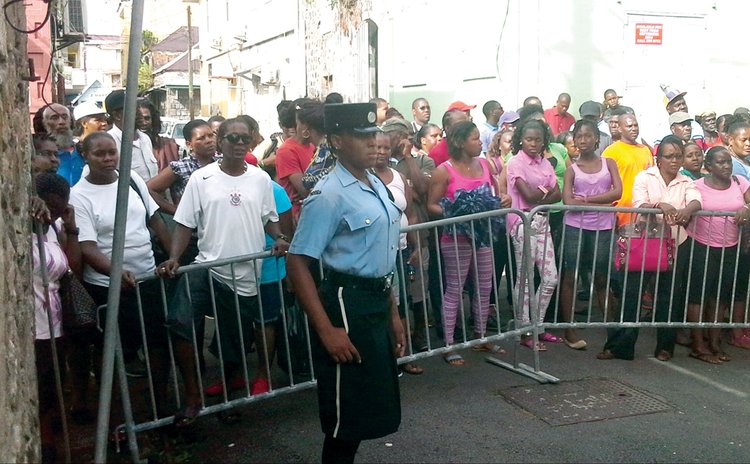 Crowd watch as accused police officers are taken to court

Three police officers will be tried for the murder of Joshua Etienne while another has been discharged.

On Monday June 6, 2016 Magistrate Arley Gill told Police Constables Martin Seaman, Devin Challenger and woman corporal Jemma Louis that he is satisfied that the State had established a "prima facie" case against them but not against Orlan Vigillie. That means there was specific evidence that if believed supports a case that needed to be proved in court.

Etienne was found dead in police cells in Portsmouth on July 4, 2014, one day after he was arrested for alleged possession of ammunition.

An autopsy revealed serious injuries including several broken bones and a punctured organ, among others. That matter created an outcry from the general public.

Sometime later the police officers went to court seeking judicial review challenging a decision to charge them but they later withdrew the matter; the charge was read to them.

The officers then applied to the High Court for bail but it was refused and the three have been on remand at the Stock Farm Prison since then.

At the hearing on Monday, Magistrate Gill first went through some of the evidence provided by the State against the accused police officers. They are represented by Zena Moore Dyer. She had argued that the State had not presented sufficient evidence to have them stand trial for murder and moved a "no case submission."

But Sherma Dalrymple, a State attorney attached to the office of the Director of Public Prosecutions (DPP) who heads the State's case, argued that the evidence provided was "strong" and enough for a conviction before a judge and jury.