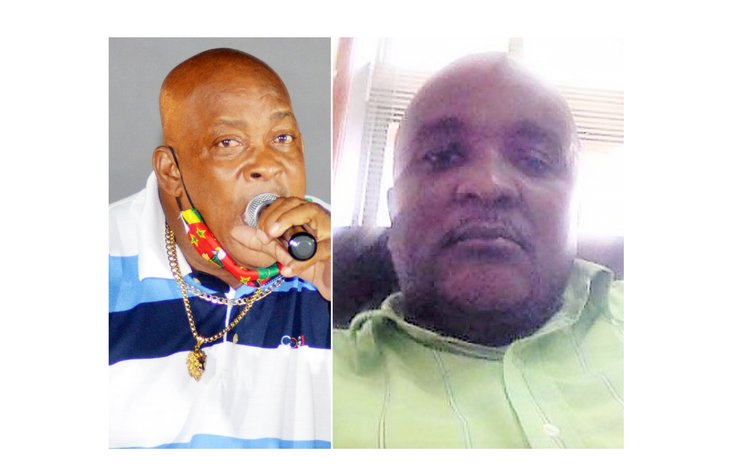 A police investigation into a suspected work permit fraud at the Labour Division has resulted in the arrest and subsequent charge of two public officers.

Deputy Labour Commissioner Eric Mendes of Leopoldville, Wall House and a Ministry of Health employee, Clartus Jefferson Charles, known in the Calypso arena as 'Big Jeff' of Sibouli, Pointe Michel, appeared before Magistrate Michael Laudat on April 1, 2021, where they were slapped with several fraud-related charges.

Since the alleged offences are indictable the men were not required to enter a plea.

According to Acting Police Chief, Lincoln Corbette, the police was recently placed on high alert following the arrival of two Haitians at the airport.

Corbette told the press that three public officers included an employee of the Inland Revenue Division were assisting the police with their investigation. However, the following day only Mendes and Charles were brought before the court. Mendes had nine charges against him including uttering, forgery and possession of forged documents.

It is alleged that on February 24, 2021, at the Government Headquarters in Roseau, Mendes did maliciously for the purpose of deceit uttered to one individual nine forged work permits in the name of Haitian nationals.

On the same day he is also accused of uttering two work/residence permit approval letters dated April 28 and May 28, 2020, claiming to be from the Division of Labour (DOL) in the names of two Haitians as well as nine letters purported to be from the DOL to the Comptroller of the Inland Revenue Division directing him to issue work permits in the favour of nine Haitians which were forged.

In respect to the charge of forgery, reportedly between April 27, 2020, and February 25, 2021, Mendes maliciously for the purpose of deceit forge by printing work residence permit approval letters dated April 28, and May 28, 2020, purporting to be of the DOL in the name of two Haitians.

Between December 30, 2020, and February 25, 2021, he is also said to have forged by printing work permits in the name of nine Haitians and later between February 14, 2021, and February 25 forge by printing nine memorandums dated February 15, 2021, purported to be from the DOL directing the Comptroller of the Inland Revenue Division to issue work permits in the favour of nine Haitians which were forged.

According to information from the court, on February 24, 2021, at the Inland Revenue Division in Roseau, Charles did maliciously for the purpose of deceit, uttered nine work permits, two residence permits approval letters and nine memorandums all in the name of Haitian nationals to an Inland Revenue employee knowing the documents to be forged.

As part of the bail conditions imposed, Magistrate Laudat told the men they are to report to the Roseau Police Station every Wednesday between 7:00 a.m. to 7:00 p.m. and surrender all their travel documents to the court.

Because of the bust, the Ministry of National Security and Home Affairs has announced that certain measures are to be instituted "to ensure the sanctity of the process of work permit issuance is working well."

In a release issued to the media, the Ministry noted that preliminary investigations suggest the suspected fraud does not in any way include legitimate documents processed by the Ministry of National Security and Home Affairs.

Meantime, the Acting Chief deemed it "worrying" that senior officials would engage in such illegal activities.

"It borders on the issue of national security," Corbette said. "So we are very concerned."

At the press conference, Corbette revealed that the police had seized money from another but unrelated police bust.

According to Corbette, the police along with officers from the Custom and Excise Division executed a search warrant for cash at an apartment located at Comfort Cottages in Terre Platte, Paix Bouche where United States currency valued at EC$1,322,667.27 was confiscated.

As a result, two men, Aronnie Armstead Stedman of St. Joseph and Kendel Sylvester of Woodford Hill, were arrested on suspicion of money laundering.

He said the men were released pending an investigation by the Financial Intelligence Unit (FIU) but did not dismiss the possibility of a re-arrest and charge at a later date.

The police are also investigating the theft of an unspecified sum of cash from the Government's Treasury.

The Acting Chief said one female employee of the Treasury Department is assisting the police with their investigation and no money has been recovered.