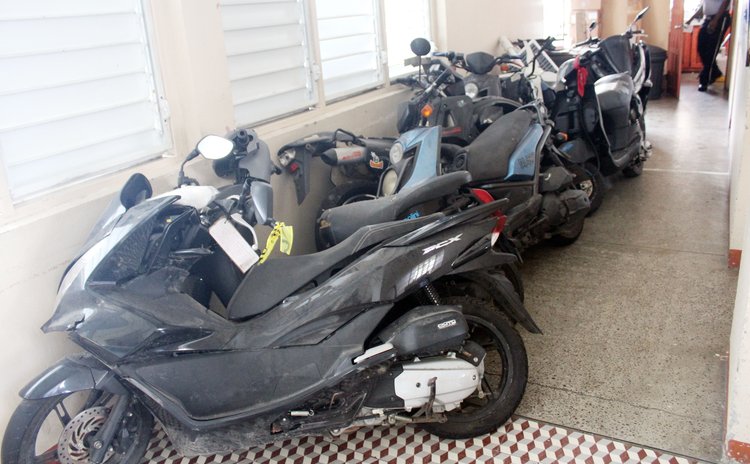 Part of a collection of confiscated bikes at police station

While the community of Stockfarm mourns the loss of a young biker in an accident over the weekend, officials of the Dominica Police Force are reporting an increase in the number of unlicensed and uninsured scooters on the island.

"Almost 80% of the scooters on the road are unlicensed and uninsured and creating problems," said Acting Assistant Superintendent of Police (ASP) Ulando Cuffy who is in charge of the traffic department.

In addition, to the irritation of pedestrians, scooter riders meander recklessly through traffic, do not obey traffic regulations and are usually involved in sometimes fatal accidents.

"It is sad to say that many of them die as a result of those accidents which are most times fatal," Cuffy said. But the Customs department has also complained that many of these bikes "did not pass through customs on arrival in Dominica and no customs documents to prove their legitimate existence," said Cuffy.

"They are fully aware that they are unlicensed and uninsured and continue to break the traffic laws over- taking any how; we are fed-up," Cuffy said. "We have seized hundreds of them over the years and brought matters before the courts but we can do so much".

Cuffy said there are dozens of scooters parked in heaps at the Traffic Department on High Street, at the Police Headquarters in Roseau and at the police training facility at Morne Bruce.

Many of these bikes do not have identification numbers on their frames because these numbers were "scratched out", Cuffy said

"They need to get the message and bring in the bikes legally and go through the normal channel. The police do what they have to do and the rest is left with the court," said Cuffy. "We are also sending a strong warning to them that they must understand that they need to abide by the law of the land and not showing up on the scene when a colleague is involved in an accident to create confusion. They are not the police and that practice must stop and we are warning them".

Meanwhile, Carlos Charles, the president of Nature Island Riders Association says he shares the concerns of the police because an individual member's criminality also reflects badly on the association.