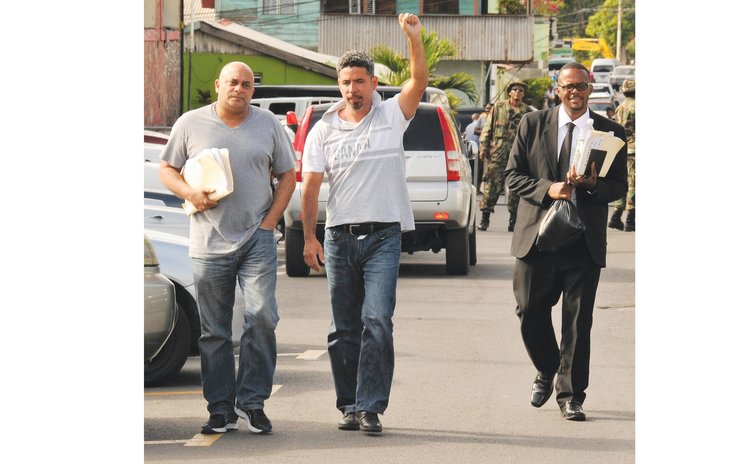 The year began with 60 Minutes, the top level American television programme that featured the sale of passports as a major economic activity for cash strapped countries like Dominica.

The programme, broadcast on January 01 2017 and entitled "Passports for Sale", featured statements from Leader of the Opposition Lennox Linton on Dominica's Citizenship by Investment programme. Linton said the Dominica CBI was not transparent. Well, "who tell him say dat?"

Just after the programme aired, Linton said in a statement, Prime Minister Roosevelt Skerrit launched a "campaign of deception and propaganda to discredit, demonize and dehumanize" him.

"In every respect and every aspect, I spoke the same truth I have been speaking for years about matters of concern in the evolution of an economic citizenship program that would keep Dominica away from being a threat to global security. I said what I meant; I meant what I said in the public interest of Dominica. I was correctly quoted and represented," Linton said. "The Prime Minister was invited to appear on the CBS News 60 Minutes program. He declined".

Chaos ensued when Parliament met in 2017 to amend election laws and to make it legal to transport voters to Dominica to vote. The Government was forced to postpone, indefinitely, a measure to make legal the mass importation of voters to shore up constituencies it could otherwise lose in a general election.

In one of the most contentious and vexing general election issues, the new measure would have removed any doubt about the legality of transporting people to Dominica to vote in any general election, according to the draft.

"For the avoidance of doubt the transportation of electors or the facilitation of the transportation or electors to or within Dominica for the purposes of an election does not constitute an offence unless the transportation is provided or facilitated with the intention to corruptly induce an elector to vote for a particular candidate for whom or party for which the elector would not otherwise vote," the amendment says.

Judge Stephenson: Linton had no defence

In what can be dubbed the case of the missing defence, a local judge inflicted yet another legal defeat on United Workers Party (UWP) leader Lennox Linton in a nasty political case that was played out in the courts in 2017.

High court judge Bernie Stephenson determined that Linton's defence did not stand a chance in a lawsuit brought against the UWP leader by 18 men and women of Prime Minister Roosevelt Skerrit's former cabinet – three of whom had no ministerial portfolios and some of whom have since been defeated at the polls or retired.

The issue revolved around comments made by the opposition leader at a youth rally in May 2014 while disclosing allegations made about an unnamed minister by a young woman.

The entire Skerrit cabinet at the time felt that he had defamed them and filed a lawsuit seeking EC$1 million in damages. Joshua Francis: I'm bad

During much of 2017, Roseau South Member of Parliament, Joshua Francis, was back on the frontline of the UWP combat zone but by year end he declared that although he would complete his term, he was done with politics and he will not contest the next election.

Since the embattled MP was arrested and charged for inappropriate behavior with a minor, he has been at odds with Lennox Linton, the UWP political leader.

But in March Francis suggested that though he'd walked through the political valley of death he feared no evil. He told supporters at a town hall meeting at the Loubiere Resource Centre on March 22, 2017 that he was "bad" a la the late Michael Jackson.

At the end of its delegate's convention in August, the once-powerful Dominica Freedom Party (DFP) elected former Caribbean Development Bank economist Kent Vital as its party leader and medical doctor Sam Christian as its deputy political leader. But Dr. Christian resigned a few months afterwards suggesting that he had major disagreements with the political process that the DFP had adopted.

At that conference former Dominica Labour Party (DLP) supporter and diplomat Crispin Gregoire, the keynote speaker, declared that the DLP had had lost its way.

"It has been reduced to a shell of a party," Gregoire said. "It is what I call a cult following; that's what it is, not a party and that's really unfortunate because it took us many years to build that party", he said. Salisbury erupts again

In May protesters blocked the Edward Oliver LeBlanc Highway near Salisbury and police faced a hostile crowd as they moved to clear the blocked roadway. In the process the police fired gunshots and teargas but there were no reports of injuries. There were no clearly stated reason for the protest though Salisbury has been a hub of protest action in recent years for issues such as poor road conditions and general neglect by the current administration.