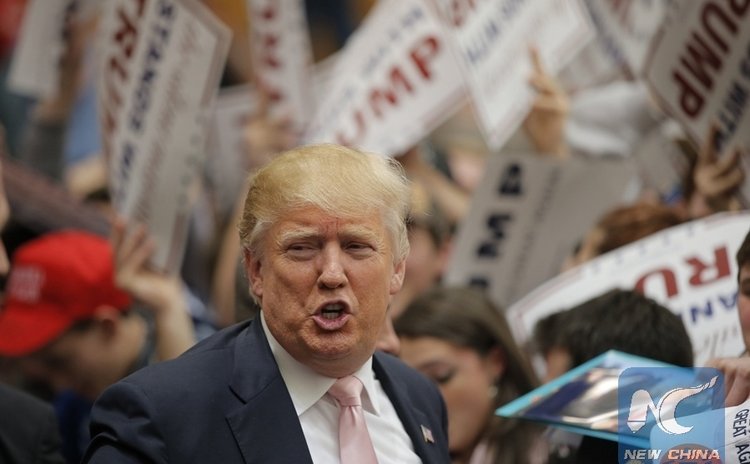 WASHINGTON, Feb. 29 (Xinhua) -- For any Republicans determined to stop the seemingly unstoppable Donald Trump from becoming the party's standard-bearer, the upcoming Super Tuesday could be their best chance so far in this chaotic election cycle. The question is, can they grab the chance?

According to polls, however, the cards are stacked against those Republicans who now seem to be receptive to any nominee as long as it is not Trump.

After three consecutive victories out of four races in February, now more than 80 percent of Republican voters believe that Trump will be their party's nominee, said a Rasmussen Report poll last weekend.

As the five Republican presidential candidates are barreling towards Super Tuesday on March 1, where 11 U.S. states will hold either Republican primaries or caucuses, a sweeping victories by Trump everywhere now seems increasingly possible.

The long-time Republican front-runner now leads the latest poll in eight of the 11 states which will vote on Tuesday.

Even Trump's major rival, Senator Ted Cruz from Texas, acknowledged that a strong showing by Trump on Super Tuesday means light out for all other candidates still struggling to survive under Trump's domination of the field.

"There is no doubt that if Donald steamrolls through Super Tuesday, wins everywhere with big margins, that he may well be unstoppable," Cruz acknowledged on CBS's "Face the Nation" on Sunday.

Contrary to pundit belief, Trump so far has not lost any ground since Former Florida Governor Jeb Bush bowed out after defeat in South Carolina and thus vacated a once crowded Establishment Lane for mainstream candidate Senator Marco Rubio to amass campaign resources.

Despite his formidable polling numbers, however, Trump will not be able to end the nomination race on Tuesday no matter how strong his showing will be, since in this phase all delegates will be allotted proportionally.

As many as 595 Republican delegates are at stake on Super Tuesday. To win the party's nomination, a candidate has to garner 1,237 delegates.

After Super Tuesday, a series of winner-take-all Republican primaries will be held across the country, among which the Florida primary on March 15 with 99 delegates at stake has already attracted enormous media attention.