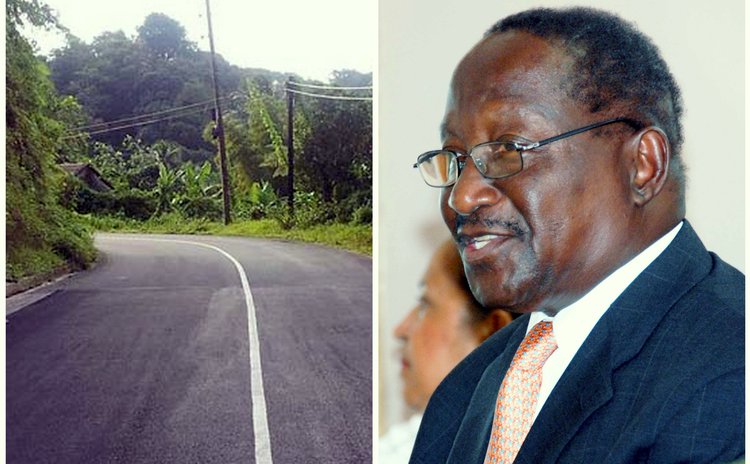 Dr. Nicholas Joseph Orville Liverpool, Dominica's sixth president was honored on November 1st 2014 when the newly rehabilitated Pond Casse to the Douglas – Charles Airport road was renamed in his honour.

Dr. Liverpool served as President of the Commonwealth of Dominica for nine years from October 2nd 2003 – September 12th 2012, a year early due to health complications.

At the ceremony Minister for Public Works Energy and Ports Rayburn Blackmore stated that now and hereafter Dr. Liverpool will stand out as a national emblem.
"That gives us reasons to be glad and celebrate… you, Dr. Liverpool deserve that name," Blackmore said.

Meanwhile, Prime Minister Roosevelt Skerrit said that the stretch of road is being renamed after a distinguished man of the soil, a true patriot the one who has received international recognition for his work in Law.

"His loyal and dignified service to our country, have earned himself regional and international acclaim. His work has caused the world to take a closer look at Dominica. Ladies and gentlemen, I refer to none other than our honoured guest, Dr. Nicholas Joseph Orville Liverpool", said Prime Minister Skerrit. "As our nation approaches the climax of celebrating its thirty sixth anniversary of Independence, and as we prepare for some exciting developments in Dominica thereafter, in pursuit of the fulfillment of the dream of true Independence, it is absolutely essential that we honour our own and use them as role models to inspire our people to pursue nothing but the best for Dominica."

"We are well on the way to meeting these targets. And this road is testimony to that. The next wave of road improvements and upgrading, targets the east coast roads, from Pond Casse to Delices and from Pond Casse through Castle Bruce and the Carib Territory on to Hatton Garden. Funding for the works to be carried out has already been negotiated and secured from the European Union and from the World Bank," he said.