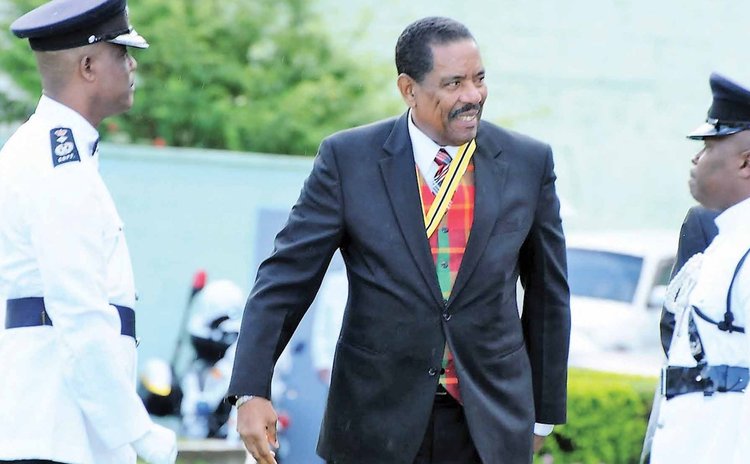 Instead of uniting after being devastated by the most ferocious hurricanes of the century and on the eve of the nation's 40th anniversary of independence when everyone will be espousing empty platitudes about unity, the country of rivers and rainbows and climate resilience was again plunged into divisive partisan turmoil when Charles Angelo Savarin was elected, for the second and final term, as the President of the Commonwealth of Dominica. But that chaos was as predictable as the next sunrise.

In 2013 Linton said Mr. Savarin could not be a president of the majority of Dominicans because he had "demonstrated over the years that he is so incurably partisan that he simply cannot fit the bill of being an independent, objective, impartial holder of the office of president."

Five years ago, Charles Savarin had to resign as a government minister to become eligible for his nomination as Head of State. Recall that Savarin was government's third nominee for the post after the current Speaker of Parliament, Alix Boyd Knights, pulled out following public outcry over her nomination and the second nominee, Jennifer Lafond, declined the offer.

So, if Prime Minister Roosevelt Skerrit really wanted a joint nominee for the post of President he was fore warned that Charles Angelo Savarin was not an acceptable candidate. Therefore, the farce that we witnessed in Parliament last week was just what it was. Prime Minister Skerrit was electing his president and for all intents and purposes he could have done so without a meeting of the House of Assembly, right in the Cabinet Room. Parliament, as we have reiterated is a mere rubber stamp of the executive's decision. No parliamentarian, on either side, dares voting according to his or her conscience.

And since any proposed second nominee was also unelectable, even before the House of Assembly met, no person with the credentials to be president of Dominica would subject his or her reputation to the inevitable brutality of partisan politics.

Recall that the late President N.J.O Liverpool was so keenly aware of that predilection in Dominican politics that he told late Prime Minister Pierre Charles that he would accept the post of president on one condition: that he must be jointly nominated.
But because of his past President Charles Savarin will always be seen as a divisive figure in Dominican politics.

The opposition, and many other Dominicans, see President Savarin as the self-serving politician who in the1970s influenced the Civil Service Association (CSA)-now the Dominica Public Service Union (DPSU)-into supporting the Dominica Freedom Party (DFP) in the violent overthrow of the democratically-elected Dominica Labour Party (DLP) government of Patrick Roland John. On the other hand many persons argue Savarin, as the general secretary of the CSA, removed Dominica from the tyrannical grip of the Patrick John DLP administration.

Whatever point of view is closest to the truth, there is little doubt that without Charles Savarin the DFP would not have formed the government and Dame Eugenia Charles would then not have led Dominica for 15 years. Those of us who are old enough will remember that civil servants of the 1970s believed Savarin was the master negotiator who, like Moses, led them through 47 days of strike action when Dominica was virtually closed to the rest of the world. That strike was such a crippling blow to the Dominican economy that we wonder whether the island will ever recover.

In addition, we can never forget that Savarin, as head of the CSA, forced government to offer civil servants massive concessions in the form of considerable salary increases and back pay. That contributed to the defeat of the DLP and then Savarin and the DFP walked into the vacuum that the May 29, 1979 riots created.

That Savarin used the CSA's position of strength to catapult his political career cannot be disputed. After all, some of Savarin's supporters argue, that the Portsmouth-born politician had demonstrated such considerable skills as a trade unionist that it would have been wasteful if those skills were not used for the development of all of Dominica. But when Savarin left the CSA and became a full-fledged member of the DFP some civil servants felt abused, cheated and misled.

Later on, Savarin as political leader of the DFP again saved Dominica from the jaws of UWP tyranny, his supporters contend. This time Savarin decided that he would move in with his arch-rival DLP in a coalition arrangement to prevent the United Workers Party (UWP) from forming the government after the January 2000 General Elections.

Other commentators, however, argue that Savarin sacrificed the much-weakened DFP to save the DLP and when the coalition arrangement ended, Savarin kept himself within the DLP corridors of power. And he has become president.

On the other hand, it cannot be disputed that Savarin had had a long and distinguished career as a teacher, trade unionist, parliamentarian, diplomat and government minister and these positions qualify him to be President of Dominica.

Although the post of President of Dominica is mainly ceremonial, Dominicans expect the person who holds the top post in their country to stand way above the fray of party political wrangling and to be President of all the people; not President of the leading party only.