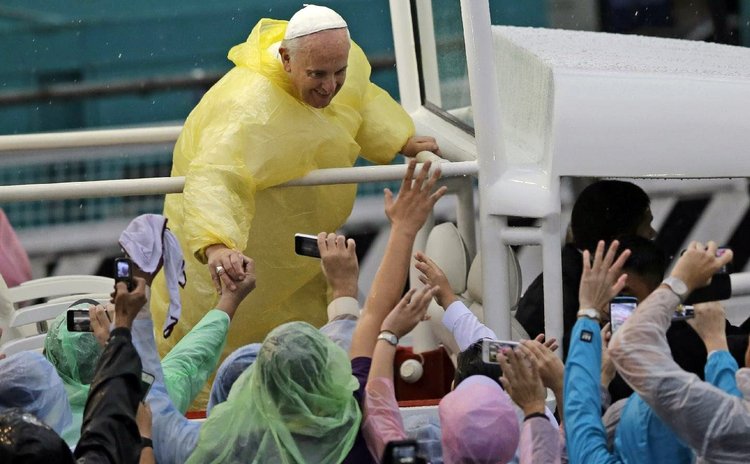 "As many voices in your nation have pointed out, it is now, more than ever, necessary that political leaders be outstanding for honesty, integrity and commitment to the common good," the pope said in a speech he delivered before senior government officials and members of the diplomatic corps in Malacanang, the presidential palace.

He made the call after calling on President Benigno S. Aquino III.

The pontiff said that there is a need to ensure social justice and respect for human dignity.

With the 2015 to be set aside as the "Year of the Poor" for the Philippines, he expressed hope that everyone at all levels would " reject every form of corruption which diverts resources from the poor, and make concerted efforts to ensure the inclusion of every man and woman and child in the life of the community."

Meanwhile, Pope Francis drew a record six million people as he celebrated mass in the rain-swept Philippines capital Sunday, delivering a powerful message for the poor to a rapturous audience in a triumphant finale to an Asian tour.

Filipinos are famous for practising a passionate brand of Catholicism and they turned out in force despite the wet weather, determined to see the charismatic 78-year-old pontiff, and in a celebratory mood that defied the gloomy skies.

Francis made an exhilarating entrance to a Manila bayside park for the mass aboard a "popemobile" that was styled after the nation's iconic, flamboyant and much-loved "jeepney" minibus.

Dressed in a plastic yellow poncho, he waved and smiled to wildly cheering crowds, stopping repeatedly so he could lean over barriers and kiss babies, before reaching the sea of believers at Rizal Park.

The Philippines is the Catholic Church's bastion in Asia, with 80 percent of the former Spanish colony followers of the faith, and the pope praised them for their reverence

The leader of the Roman Catholic Church arrived in Manila on Thursday for a state and pastoral visit to the country and left today, Monday for Rome.