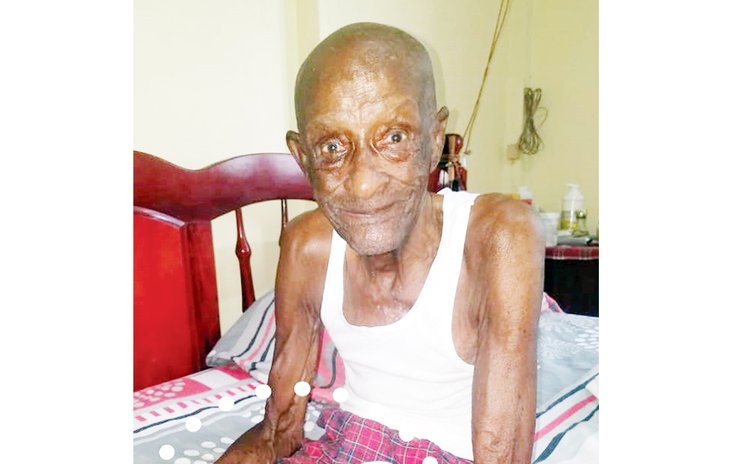 With friends and relatives, who had to social distance because of COVID-19, the centenarian celebrated his 105th birthday on 2nd September 2020, at his home in Goodwill. "He will give us at least one more year," said Corynthia Blanc Esprit when she was asked how more years she believes Popeye will live. "We have to take it year by year." Blanc-Esprit is a member of the Friendship Crew group who celebrates Popeye's birthday with him each year. When Popeye became one of Dominica's centenarians in September 2015 the Sun published a piece celebrating his life. Here it is:

One hundred year-old Popeye: "If I feel like dancing, I dance"

Oscar "Popeye" Joseph who lives in Goodwill celebrated his 100th birthday in grand style with a service at the Lady of Fatima Church and a party at the Goodwill Parish Hall.

Newly inducted into the centenarian world, Joseph is as healthy as an ox. Speaking to the Sun on September 9, 2015 Joseph said he has no health problems or conditions and simply goes with the flow as he continues to live his life.

"I don't have no special diet; I eat anything at any time. I can get up any time in the night, go in the fridge, if I am thirsty I drink ice water, if there is banana I eat banana. I wake up, I feel like dancing I put on my music and dance. I don't drink anymore and I don't smoke," he said.

He attended the Roseau Boys School and then moved on to the Roseau Mixed School. Joseph, who has been driving for over 75 years, received his license in January 1938 and his first driving job was as an employee of Hugh Grell, the father of Dr. Gerald Grell.
According to Popeye, he spent the next 13 years of life in Antigua where he met his wife, Daphne Dover. She died in 2001.

After he was offered a job there, Joseph migrated to Antigua. The job-offer came from R.L. Bellot who was travelling with an American dentist, Dr Woodman, who came to Dominica on annual visits.

Joseph said he left Roseau with Bellot on June 13, 1938, went to Portsmouth to collect bananas then was headed to Antigua via a Canadian ship named Hawkins.

However, the ship first went to Montserrat. That was the first foreign land Joseph stepped on. Then he went to Antigua where he spent the next 13 years of his life. He said that after 16 days in Antigua he received the news that his mother had passed away.

Upon his return to Dominica, Joseph became a sailor and travelled around the world. On one of his adventures he saw someone selling ice cream in a van on a wharf in south Wales.

Joseph said he knew he could not be a sailor for his entire life and thought that selling ice cream in a truck in Dominica would be a good way to earn a living.

Joseph has been selling ice cream for 50 years in his signature Popeye's truck. Although he was not the first Dominican to make ice cream, he was the first to sell ice cream from a truck.

"I was the first person to bring an ice cream truck here but PIWI used to make ice cream before me. When I brought mine he sent somebody to me that he will make the ice cream for me and I would sell it. I said no: "PIWI is PIWI and Popeye will be Popeye. So the customers will have a choice, if they rather mine than yours, that's fine'," said Joseph.

Still vibrant and full of life, Joseph still operates his business but from a distance. Although he still drives, Joseph has passed on the business responsibility to his son, Lester Joseph, who sells ice cream on Mondays, Wednesdays, Fridays, Saturdays and Sundays.