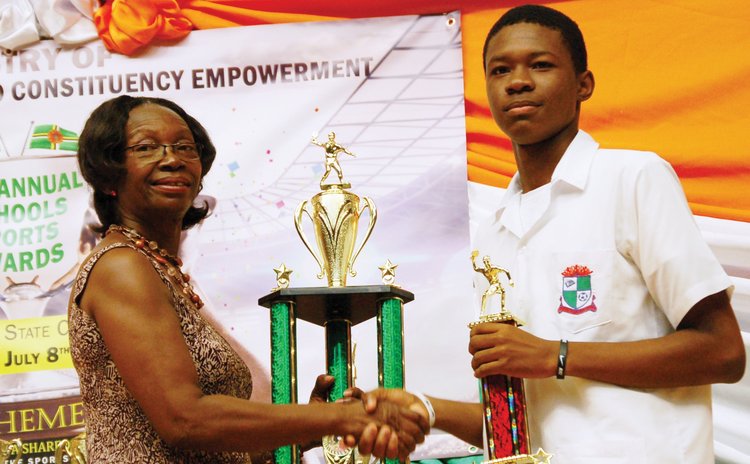 Ms. Walsh hands over trophy for table tennis to PSS

Portsmouth Secondary School (PSS) increased their tally of trophies in the 2016-2017 schoolyear of sports organised by the Ministry of Youth, Sports, Culture & Constituency Empowerment (Sports Division) by 25% over the preceding year. The school, which dominated table tennis with 7 awards, basketball 8, netball 8 and volleyball 3, captured 30 awards compared to 24 the year before.

Claiming second spot ahead of Dominica State College (DSC) with 19 awards compared to 24 the year before were the Dominica Grammar School (DGS) 23 awards with 12 trophies for football, track & field (TF) 5 and cricket 4. DSC took 5 prizes for cricket, volleyball 4, basketball 4, table tennis and TF 3 each.

St Mary's Academy collected 18 awards including 10 for football, and cricket 8. North East Comprehensive School had 14 trophies with 6 for table tennis, and netball 5. Castle Bruce SS were right there in the mix with 13 – volleyball 5, cricket 4 and TF 3. Isaiah Thomas SS collected 10 with 4 coming through football and cricket 2. Pierre Charles SS got 5 trophies with 4 for basketball. Convent High School took 2 awards in table tennis while Goodwill SS and Lead Institute each made their mark at the 25th Annual Schools Sports Awards Ceremony at the Dominica State College under the theme: Sport Development – A shared responsibility.

At the primary school (PS) level at least 27 schools came away from the awards ceremony with something to show for their efforts in the school year. Wills Strathmore Stevens PS continued to be in the forefront with at least 9 awards including 2 for table tennis. Calibishie PS had 5 with 2 for football. Roosevelt, Douglas PS had 4 awards with Bellevue Chopin PS, Goodwill PS and Sineku 3 apiece. Castle Bruce PS, Clifton/Savanne Paille Combined, Grand Bay PS, Mahaut PS, Morne Prosper PS, Paix Bouche PS and Wesley PS 2 each.

Sports Coordinator Trevor Shillingford gave an outline of the widening scope of the division's programme with hundreds of boys and girls participating in the various sporting disciplines – basketball, cricket, football, netball, volleyball and beach volleyball, track & field and table tennis – from 51 primary and 16 secondary schools, and indeed the cost of transporting all the young people to the various sporting venues. So among their many sponsors he mentioned.