Jump Ball No. XXXIII (Part I). By Arlington James 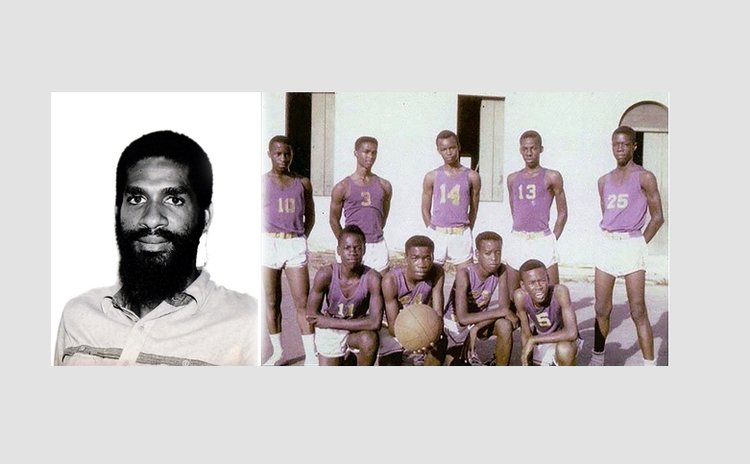 Indian River… Cabrits… Benjamin's Park… Burroughs Square. What do these have in common? Well, for one, they are all natural or historical landmarks on Dominica. Secondly, they are all associated with the town of Portsmouth which, historically, has been very active in Dominica's political landscape, culture, agriculture, fishing and sports, among other aspects of national development.

History has it that in the 1500s, the Spanish "visitors" to Prince Rupert's Bay journeyed up the Indian River to "trade" with the Kalinagos, in a village which was situated along the river's banks.

However, Portsmouth's basketball journey began on Burroughs Square, which serves as the main bus 'terminal' for the northern third of the island.

With the increase in popularity of the sport of basketball on Dominica in the 1980s, the "guys on the block" at Portsmouth set up a basketball court on "the Square". Oftentimes during pick-up games one would have to swim out to retrieve the game ball which had gone out of bounds and into the sea.

Thereafter, the young men soon formed the first basketball team to emerge from Portsmouth – a.k.a. "Possie", and they adopted the name, Raiders.

Raiders first journeyed to Roseau to participate in the national basketball league in Reunion Year 1988, and that season was an "eye-opener" for them.

Playing in Division II (2nd level men's division) in their inaugural year, Raiders managed to place only 4th out of 8 teams in their Zone, with 4 wins and 2 losses. Charles Walters, amassing 101 points in the Regular League, was the 4th highest aggregate-scorer among the 15 Division II teams that year.

But come 1989, under the direction of Player/Coach Al Monelle, the team showed remarkable improvement. That year, they emerged 2nd out of the 12 teams in Division II, with an impressive "10 & 1" Win-Loss Record! They averaged 65.64 pts/game in the Regular League (3rd highest average), and were the best defensive team, conceding an average of only 47.64 pts/game from opponents.

YES year 1989 also saw Raiders' Charles Walters emerging as the 2nd highest aggregate scorer in the Division II League, amassing 246 pts at an average of 22.4 pts/game. Placing 7th was his team-mate Ira Frazer, who had netted 171 pts in their 11 league matches.

Furthermore Walters, sinking an impressive 39 points in one of his matches, copped and shared the Michael Jones Award with another Charles (Williams, of Prowlers), for the highest player-score in a Division II match that year.

Raiders also grabbed another second in 1989, placing 2nd in the Division II Knock-Out competition, narrowly losing to the winner, Clouds, by a mere 3 pts.

1990 was another big year for Raiders who won the Division II League competition and prepared to move up to Division I to face the "big guns" such as Cardinals, Pros, Clouds, and others.

Probably one of the most memorable games for the "ole-school" Possie Raiders was played in the team's inaugural year in Division I, i.e. 1991. That night they came up against the mighty Pros of Grand Bay who, at the time, was quite experienced with players such as Lambert Henderson (deceased), Stephen "Homo" Bellot (also deceased), Garry and Gorvan Moore, and others.

During the first-half of that match Raiders' coach, Al Monelle, got ejected from the game. Furthermore, to add injury to insult, the team ended the half trailing Pros by a massive, embarrassing 27 points. Many spectators, and Pros players and bench alike, may have thought that a "super blow-out" was in the making in favour of Pros.

However, with sheer determination, Raiders made a mammoth come-back in the second-half, and actually won the game, stunning the entire Pros team and their supporters.

Following the final whistle, in their jubilation some of the Raiders players immediately went to collect their coach and brought him back to courtside, hoisted on the shoulders of two of the players, to celebrate that major victory.