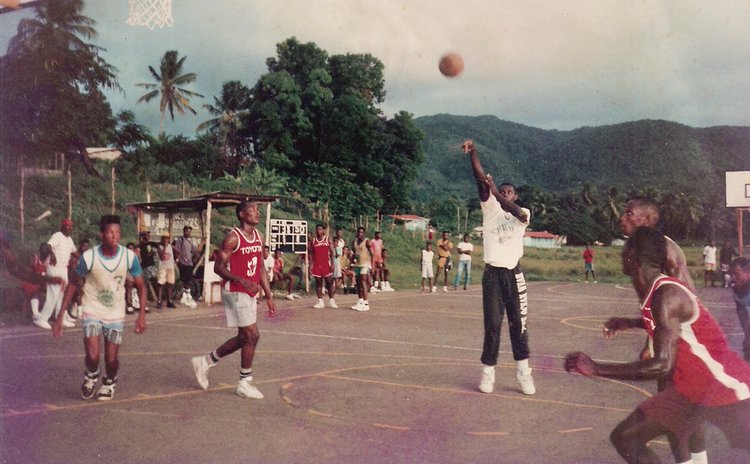 Part II of "Possie's Basketball Vibes" peeped into Raiders' performance during the periods 1997-2000 and 2015-2017, and began presenting a brief on the Portsmouth Basketball League (PBL).

PORTSMOUTH BASKETBALL LEAGUE (Ctd): In the early editions of the PBL, the participating teams comprised Cornfield Hoyas, Dolphins, OO-Washers, Paix Bouche, Sharks I and Sharks II, with the two latter teams sponsored and coached by "Bloaters". Initially, the teams played in a single division.

In ensuing years the PBL grew significantly to the point where, at one time, participating teams were separated into four (4) divisions: Senior, Under-17, Under-15 and Women's.

It may be of interest to note that around 2007, the Bombers football team from Portsmouth competed as a unit in the PBL, unlike the Basketball Doctors (team of basketballers) who had played – and got crushed – in the national football league in 1976.

Paix Bouche Eagles lifted the 2016 PBL championship trophy in Division I, while Lightning (from Portsmouth) took the Division II honours.

PBL 2017 was well on its way when Hurricane Maria brought the competition to an abrupt and premature end last September.

It may be interesting to note further that in the late 1990s, two early PBL teams, viz. Dolphins and OO-Washers, had proceeded to play in the national league, in 1997 and 1999 respectively. Both teams have since retired.

Some of the other recent PBL teams are Gators, Imperialists, Lamphers (including national goalkeeper Glenson Prince), Originals, Possie Vibrations, and Tru Riddim Ballers (a band from Lagoon who fielded a team).

POSSIE TEAMS IN THE NATIONAL LEAGUE: Teams from Portsmouth have been competing in the national basketball league run by the DABA for three decades now, although there was a relatively long break in participation.

To date five (5) teams from Portsmouth have participated in the national basketball league. Raiders competed in the senior and 2nd level men's divisions. Dolphins and OO-Washers played in the 3rd level men's division, while the only female "school team" to compete in the national league to date, viz. Eliminate Styrofoam Portsmouth Secondary School first played in the Women's Division in 2016.

Unfortunately, the East Caribbean Seventh Day Adventist Conference subsequently withdrew their schools from participating in all forms of competitive sports.

Currently, 4 of the 5 schools in Portsmouth participate in the basketball competitions of the Sports Division. Portsmouth Secondary School (PSS) Boys and PSS Girls have both won the respective Under-20 championships, with the Boys having first done so in 1999. St. John's Academy – Dominica's newest secondary school - also competes.

OO-WASHERS BASKETBALL ACADEMY: To date, Portsmouth may have produced the only basketball academy on Dominica, viz. the OO-Washers Basketball Academy, for young (14-15 year old) players from the greater Portsmouth area. Coming from that academy was the Junior Washers, which participated in a Euro-Caribbean Teenage Basketball Tournament held in Martinique in 1999.

Cameron was voted as the Tournament's Best Defensive Player.

DBOA REFEREES FROM POSSIE: Every basketball match involves three teams: the two competing teams, and the "third team" which comprises the referees and table officials. At least three basketball referees from Portsmouth became members of the Dominica Basketball Officials Association (DBOA) which is now defunct; they all performed creditably.

Al Monelle – now long retired from basketball as a player and an official - was a senior DBOA referee; he also officiated at a few matches in regional basketball tournaments held in Dominica. Henderson Peter officiated locally, as well as in the CARICOM Youth Tournament in Jamaica in 1997. Jack "Clayboy" Xavier officiated mostly at DABA, PBL and School League games played in Portsmouth.