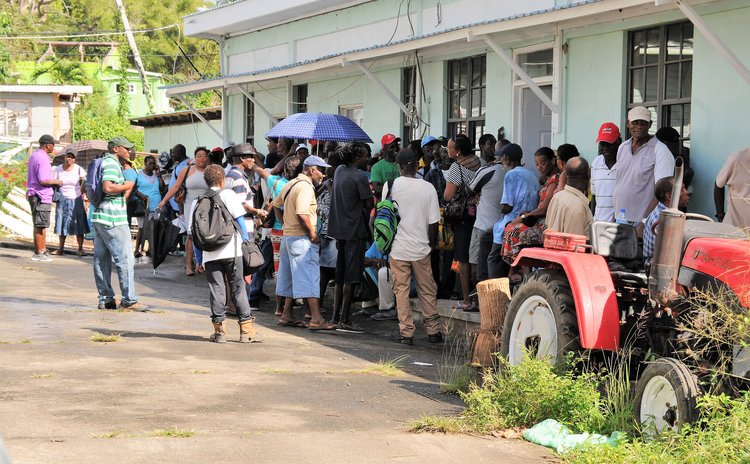 But Dr. Reginald Thomas, the permanent secretary of the Ministry of Agriculture argues that errors in the distribution of the grant were anticipated and these mistakes will be corrected soonest.

In a press statement released on 23 February the UWP said the government of Prime Minister Roosevelt Skerrit was guilty of the "politicization of the World Bank's Agricultural Emergency Response Grant (AERG) that has subjected hundreds of bona fide farmers and fishers to blatant injustice".

In February Government began the distribution of a World Bank grant of EC$18 million to commercial farmers and fishermen who suffered losses due to hurricane Maria on 18 September 2017. The Ministry of Agriculture through the Agricultural and Industrial Development Bank (AIDB) were offering commercial farmers and fishermen $10,000 and subsistence growers were promised grants of EC$1000.

Linton then called on the World Bank, in what he described as the public interest of fairness, equity, transparency and accountability "to order a full forensic investigation of the issues that have made the program a hotbed of controversy".

The UWP maintains that it is unclear whether the grant offered to farmers is to be used for farm rehabilitation or was it provided by the government for social protection or poverty alleviation.

If government provided the money for rehabilitating farms, Linton says, achieving that objective will not be possible "because substantial amounts of the grant were distributed as political hand-outs from the ruling Dominica Labour Party."

He charged that Extension Officers in the Ministry of Agriculture prepared a list of bona fide farmers and placed them into two categories based on the size of their commercial output but "operatives in the Office of the Prime Minister" adjusted that list "based on political considerations."

And the constituency of the Prime Minister was a major beneficiary. Linton added: "The hundreds of farmers across all agricultural districts whose written complaints about inadequate payments or no payments at all remain unresolved.

"The blame and threats directed at Agricultural Extension Officers for a program executed by operatives in the Office of the Prime Minister who are constantly praised by the Prime Minister for the very work that has placed significant resources allocated to farmers at the disposal of non-farmers.

Linton then called "on the Skerrit administration to publish the criteria approved by the World Bank for the distribution of the grant and end immediately this reckless, partisan, political and anti-resilience behavior in the management of post Maria rebuilding initiatives".

But Dr. Thomas has rejected Linton's claims saying that names of farmers submitted by extension workers were not crossed out.

"Some people were inevitably left out; the reason we will have to find out," Dr. Thomas told DBS, the State-owned radio station. "The information that was collected on the ground was put through a data base. That data base generated the list."

He added: "We recognize that there would have been mistakes, so we had made contingencies for that.

"We understand who were left out; we are not saying that you were not deserving. We will look at the complaints once you provide the necessary information a decision will be made.

"We are also addressing the complaints. We have received forms, all the forms and we are trying to decipher them. We have a committee, an independent committee set up to look at the respective complaints and make certain recommendations based on the information". However, Dr. Thomas did not address the allegation of "Mas in the Cemetery", an anti-government blog, that "the lion share of the funds designated for the Northern district goes to Vielle Case, Penville and Thibaud. Out of a total 152 commercial "Farmers" the government presented and approved 92 commercial farmers in the Vielle Case area".