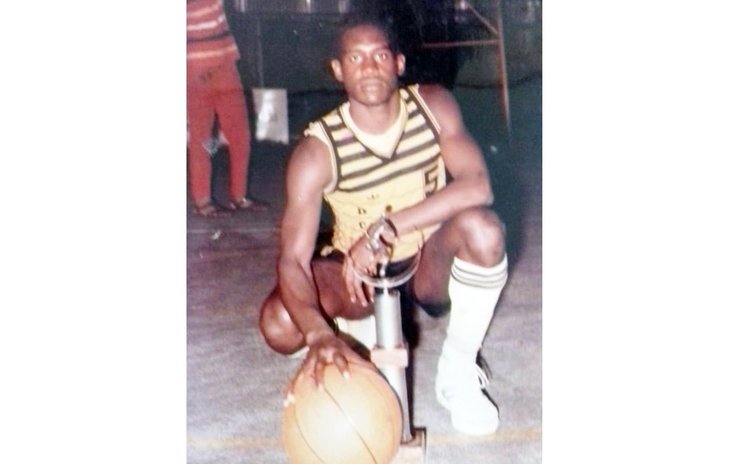 DERRICK BIRMINGHAM played with Cardinals for over a decade; 1985 photo

During the 1980s and 1990s, "Dr. Rats" was one of the 'big names' around the Windsor Park hardcourt and Dominica's national basketball league. Prior to that, there was another player nicknamed "Rats" who participated in the basketball league in the 1970s, but he made his mark more as a musician than as a basketball player.

Christened Derrick Leo Birmingham, the youngster 'acquired' the nickname "Dr. Rats", or simply "Rats" for short, and learnt to play basketball following Hurricane David in the basement of a building on Bath Road. He and his friends used a bicycle rim for the basketball rim and a piece of plyboard for the backboard. He got involved in the game at a relatively late stage, as a 17-year-old teenager, and credits Derek "DD" Alexander for igniting his interest in the sport. DD himself would go on to become and remain as another of the big names in Dominica's basketball for several years.

Dr. Rats in the National League: Birmingham played with four teams in DABA's national basketball league, and these comprised one junior and three senior (Division I) teams. He debuted in the Junior Division in 1982 as a founding member of Lamb's Bread, and captained his team to emerge 2nd out of nine teams in the Junior League competition that year. He only played with that team for the first of their 2-year history.

Lamb's Bread was featured in Jump Ball article No. 61, "LAMB'S BREAD'S BLOWOUT STORY" which was published in The Sun's Feature Column in October/November 2019.

In Rats' second year on the court (1983), he was drafted by the legendary Cardinals who by then had already amassed a glittering collection of at least 24 League, Knockout and Playoff championship trophies in the senior division. Birmingham would go on to play with Cardinals through two stints until the team's exit from the basketball scene in 2004. Playing in the Small Roving Forward position he assisted the Cards in capturing a few more championship trophies along the way.

From early in the 1983 DABA season Rats, with his powerful style of play had not only impressed on Cardinals, but had also caught the attention of the newspaper sports reporters of the day. In the 30th April 1983 edition of The New Chronicle, the sports reporter wrote then, "Young Derek Birmingham in only his second season and his first year in Division One, once again impressed with his rebounding, especially in defence. His role in the victory over Pros merits the highest commendation." Cardinals had narrowly won that match, 79-76.

That year, Derek Birmingham was presented with the Most Promising Young Player Award by the DABA.

Rats continued playing with Cardinals well into the 1990s before moving over to Killer Bees, later became a member of Clouds I, and subsequently returned to Cardinals with whom he remained up until the winningest team in Dominica's basketball retired in 2004. While with J.K. Killer Bees he assisted them capture two championship trophies, viz. one League and one Knockout.

Burning Their Nets: Rats was a regular top- or high-scorer for his team. He hit some of his highest/top scores versus Lions (26 Pts) and Eagles (24 Pts) and had a "particularly scintillating" 27 Pt vs Flames. Some of the other teams whose nets he burnt during his career in the national league were Clouds, Cusport, Harks, Hoyas, Killer Bees, Owls, Pros, Raiders, Running Rebels, SMAGs, Wizards and Wolverines.

When asked which was the team in the national league that he enjoyed playing against the most, Rats responded, "At the local level, each team had its strengths and weaknesses, but they were all very competitive. I particularly liked playing against Pros, and later Blazers."

Dr. Rats in "Off-Seasons": Many basketball players annually looked forward to the official end of the national basketball season in order that they could extend their energies to playing in Off-Season/Community Leagues. And Dr. Rats certainly would not be left out.

He played with Clickers in DABA's 1986/1987 Off-Season League where he was the 9th highest aggregate scorer with 99 points. He also played with a team named Sout in the Windsor Park Sunday League, and was also a high-scorer with Jam Down in the RIC (Roseau Improvement Committee), a.k.a. "Bath Road" or "Prevo" League in the late 1990s. He helped Jam Down win the championship in three consecutive years.

Spreading his rebounding wings beyond the city limits of Roseau, Rats participated in one of the editions of the Trafalgar Off-Season League where, again, he helped his team capture the league championship.