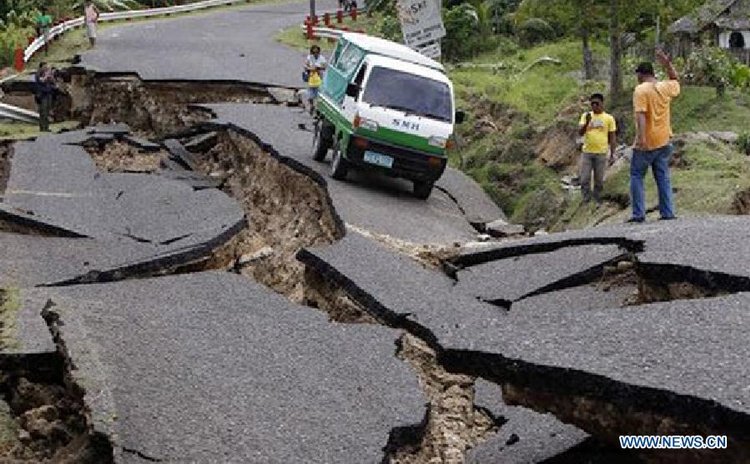 People walk on a damaged road in Kathmandu, capital of Nepal, on April 25, 2015.

KATHMANDU, April 25 (Xinhua) -- More than 720 people, including 256 in the capital of Kathmandu, have been killed in a 7.8- magnitude earthquake which jolted large parts of Nepal on Saturday.

Around 180 bodies were seen pulled from the ruins of Dharhara tower in the center of Kathmandu when the massive quake struck at 11:45 a.m. local time (0600 GMT).

The nine-story tower in the historic Basantapur Durbar Square completely collapsed, which reportedly left around 200 people trapped in the rubbles.

Hundreds of the injured people have been brought to hospitals and panicked residents gathered in Tudikhel, a large grass-covered ground in downtown Kathmandu.

As rescue operations were underway by the Nepal Army, Police and Armed Police Force, the exact casualties were yet to be confirmed. But myrepublica.com news portal quoted the Home Affairs Ministry as saying that the death toll had reach 711.

An emergency cabinet meeting had announced 29 districts in the country as crisis areas, according to the ministry.

Meanwhile, an official form the Ministry of Tourism said 10 people, including foreign climbers, had been reportedly killed in an avalanche triggered by the quake.

Two Chinese nationals were killed in the quake in Nepal, the Chinese Embassy confirmed.

People were advised to stay outdoors and keep calm as more aftershocks were feared. A 6.6-magnitude aftershock struck about an hour later after the initial tremor.

The Tribhuwan International airport in Kathmandu was shut down for hours following the quake with flights canceled or delayed.

The powerful quake, with at least 14 after-shocks, also jolted parts of India, and was felt in Malaysia, Bangladesh and Pakistan.

At least 14 people have been killed in India's eastern state of Bihar and an unknown number of casualties reported in other states, mainly in northern and eastern India.

Two Indian military aircraft, a C-130 Hercules and a C17 Globemaster, took off from the Hindon air base in Delhi to Kathmandu with relief workers, medicines and blankets.