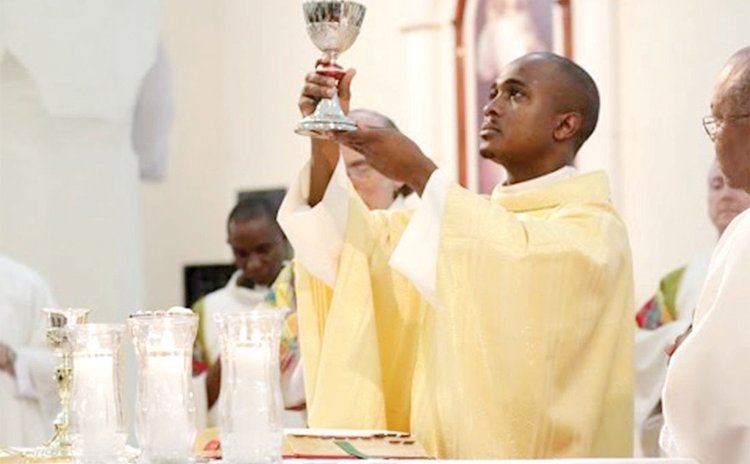 Fr Calvin Auguiste at the alter

Fr. Peter Hill, the Vicar of the English speaking Caribbean for Redemptorist has asked the faithful to pray for the Church.

Fr Hill was responding to rumours that Fr. Calvin Auguiste of St. Joseph who was ordained to the Order of Presbyterate had resigned. Fr. Hill says Fr Auguiste has taken "voluntary leave of absence."

Fr Hill also confirmed that he is the new parish priest of St. Joseph, replacing Fr. Vanty Auguiste who has taken "medical leave of absence."

Fr. Calvin Auguiste of St. Joseph was ordained a Roman Catholic Priest by Bishop of the Diocese of Roseau, His Lordship Gabriel Malzaire in May 2015 in St. Joseph. He then moved to St. Lucia where he worked.

"Fr. Calvin made a decision to leave the priesthood and the Redemptorist Order. We are saddened by his decision, and we support him as he discerns God's call. He has been given voluntary leave of absence from his duties," Vicar Fr. Peter Hill said.

There has been speculation as to the reason (s) for the departure of Fr. Calvin from the priesthood just one year after his ordination.

However when the SUN asked the Vicar he stated: "His reasons are personal and we respect that."

Asked when will Fr Calvin Auguiste be relieved, officially, of his duties as a priest Fr Hill said: "it has to go through a process and Rome has the final say in the matter."

Bishop Malzaire has also confirmed that he received notification from the head of the Redemptorist in St. Lucia that Fr. Calvin had "taken voluntary leave of absence." He did not want to be drawn into further comments on the matter.

During his ordination ceremony, Bishop Malzaire told the new priest that God has placed trust in him and it is his job to make that trust a reality.

"To call a young man in his prime and put in his heart the desire to leave the enticement of the world and dedicate his life for things that are noble, for things that are eternal and moreover for God to trust that he can make it," he stated. "Brother Calvin, believe it or not, this is the trust that the Almighty God has placed in you, now it is left to you to bring it to fruition," the Bishop said.

He said his prayer is that Fr. Calvin would be the best he can be in humility and love for the people of God.

Meantime, Bishop Malzaire and Vicar Fr. Peter Hill has confirmed that parish priest of St. Joseph Fr. Vanty Auguiste who is also a member of the Order of Redemptorist is on medical leave of absence.

"Fr. Vanty is on medical leave…that's all we are at liberty to say at this point," Vicar Fr. Peter Hill said.

He added that while he understands the anger and frustration of the people church officials are at liberty to speak only when they have "information."

Fr. Peter Hill says instead of the "gossip and speculation "the best thing is to pray".

"Pray for God's will, the gossip will not help," he said.

Fr. Vanty has been a priest for just over 25 years.