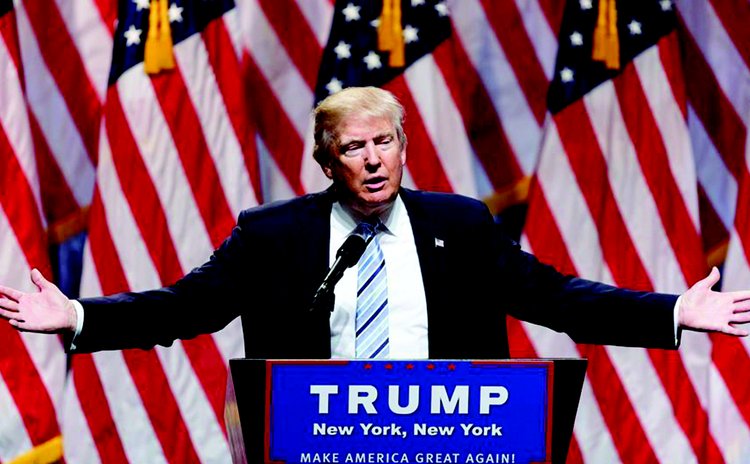 Policies of new United States President Donald Trump will have devastating impacts on Dominica and the Caribbean, experts say

The predictions are dire, the forecast is gloomy, and the consensus is Donald Trump's election as the 45th president of the United States will make the world broke again.

"My expectation is that we are going to see a deepening of the world recession because three quarters of humanity will assume that the United States no longer possesses the moral authority to direct the world economy," economic historian and vice chancellor of the University of the West Indies (UWI) Hilary Beckles said in an immediate reaction to last week's shock result in which the Republican defeated Democrat Hilary Clinton.

Trump ran a nativist, isolationist campaign that was anti virtually everything, and while he presented little to no policy details, his strong anti-immigration rhetoric, including threats to deport over 11 million illegal immigrants and to build a wall along the US border with Mexico, has left many restless.

"His pronouncements on undocumented immigrants should be of concern. Mass deportation would negatively impact Caribbean countries," one former diplomat told The Sun.

The US policy of deporting criminals to their countries of origin has been blamed in the past for a rise in violent and sophisticated crime in many Caribbean states. Many now fear what transpired in the past will pale in comparison to the doom that would follow mass deportations.

In this regard, Beckles warned countries like Dominica and the rest of the Caribbean to brace themselves for "migration of larger numbers of Caribbean people back to the region" because Trump's election had "reconstructed the white global supremacy system".

Trump ran a campaign based on a promise to make America great again, but experts believe his presidency will result in a world that is unsafe again, particularly economically and on the issue of climate change. He threatened a trade war with China, Dominica's largest benefactor, and called global warming a hoax created by the Chinese to give Beijing an economic advantage.

The president-elect has also threatened to pull the United States from the historic climate agreement signed in Paris this year, as well as reverse many of the measures that Barrack Obama instituted to combat climate change.

This, said the former diplomat, would not be good for Dominica and the region, which contribute very little to greenhouse gas emissions, but which continue to suffer from its effects with a rise in the frequency and severity of tropical cyclones such as Tropical Storm Erika which virtually wiped out Dominica's economy last year.

"One policy area that will be an area of divergence for Dominica and the Caribbean is climate change. He has said that he will withdraw from the Paris Accord on Climate Change and the ratification of the agreement. That would be bad news for the Caribbean and indeed the world if he does withdraw. The US is the largest contributor to global emissions and greenhouse gases," the former ambassador told The Sun.

On other foreign policy issues the picture is a lot murkier. It is unclear, for example, what Trump's position will be on a number of local and regional issues of concern to Dominica, the former diplomat said.

"It is not clear to me what stance his administration will have towards economic citizenship," the former envoy told The Sun.

"He is unlikely to push for lifting the economic embargo on Cuba - he may try to derail the process of the normalizing relations with Cuba started by President Obama. On Venezuela, he may take a hard line position with President [Nicolas] Maduro and throw support to the Opposition. However, Venezuelan oil will continue to be important to the US."

Like the global markets on the day after the election, Trump's victory has sent confidence around the world tumbling; and the forecast remains gloomy.