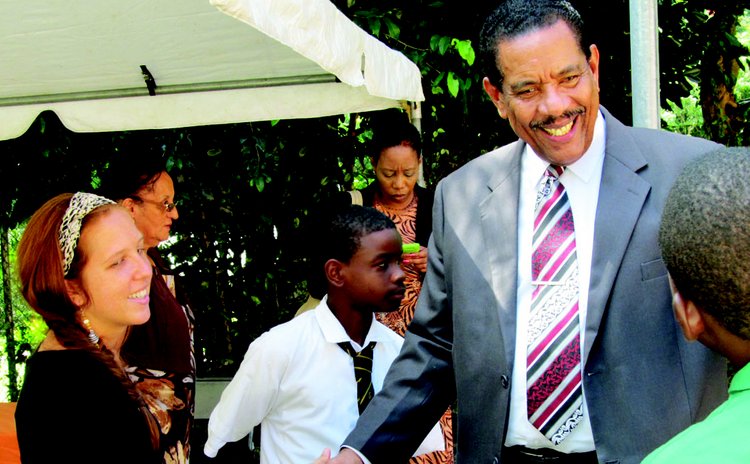 Young residents – comprising students of primary and high schools and the Dominica State College – and staff of Operation Youth Quake had some questions for His Excellency President of Dominica Charles Savarin when he visited that youth institution on Thursday November 14, 2013.

His Excellency & Mrs Savarin and members of the President's Charity Foundation (PCF) including Chairman Antoine Raffoul presented a cheque and a bag of rice to OYQ, and OYQ in turn presented President Savarin with a dozen of the best eggs it could produce.

Welcoming the President's party on behalf of residents, staff and board members of OYQ was Director Lennox Abraham.

President Savarin in response noted that a people could be judged by how it took care of its disadvantaged – the very young and very old. He cited OYQ as one of those places which looked after its disadvantaged youth well. He thanked the staff for what it did, adding that it was God's work they were doing, taking care of the Nation's young people, that everyone that was put back in society on a firm path attested to that work.

A summary of President Savarin's answers were: It was an honour to be President. One became a President on the recommendation of either the Government or Opposition side. Anyone could be President. The person would first be asked and written to if he wanted to be President. The Speaker would be written to informing of that person's interest. Then the House of Assembly would meet and vote for the President. President Savarin also explained that the person would come with some kind of experience, and he went on to enumerate his predecessors and what they had brought to that office starting with His Excellencies Fred Degazon, Jenner Armour (acting), Aurelius Marie, Sir Clarence Seignoret, Crispin Sorhaindo, Vernon Shaw, Dr Nicholas Liverpool, Eliud Williams and himself. He said his career began as a teacher at the Dominica Grammar School, general secretary of the Civil Service Association, minister of government, Ambassador in Europe, chairman of National Development Corporation, again a minister of government from 2000 with his last portfolio as Minister for National Security.

President Savarin added: The President was Head of State while the Prime Minister was head of government. The ministers had specific responsibilities for a ministry. Some legislation and appointments had to be approved and signed by the President, like the Director of Public Prosecutions, magistrates and Heads of Departments. There were commissions under his authority like the Public and Police Service Commissions, the Integrity Commission and the Election Commission and more.

President Charles Savarin said he did not see himself moving into the new State House before the end of the year. He told his young interviewers that like all houses the finishing touch took much longer than expected. He said at some point the State House would be handed over to the Government. Then the various commissions would move into their new offices and he would then take up residence. He expected them to visit the State House one day, he told them, with nods of assent from Mrs Savarin.

He also told a group that he had five children, the youngest being 26 years old; none had showed an interest in politics, each pursued a different career.

OYQ Director Abraham took President and Mrs Savarin on a tour of the living quarters and premises before His Excellency and party departed after about one hour.