As Dominicans debate the nomination of House Speaker Alix Boyd-Knights to be the country's new President, reliable sources say His Excellency Eliud Williams was not consulted. 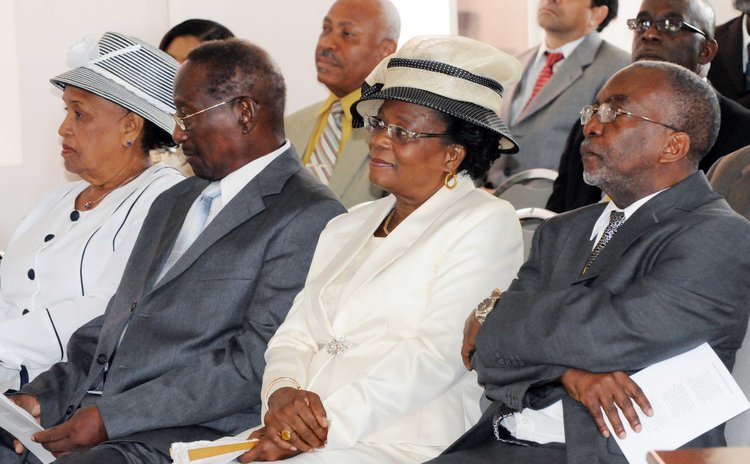 Two former Presidents:Williams and Dr Liverpool and their wives attend Swearing in ceremony

Dominicans have been expressing their views on Prime Minister Roosevelt Skerrit's controversial decision to nominate House Speaker Alix Boyd-Knights as President of Dominica; she is to replace Eliud Williams who has been holding on for Dr. Nicholas Liverpool for a year that expires in October 2013.

Reports indicate that the Dominica Christian Council may intervene but that information has not been independently confirmed.

In making the nomination of Boyd-Knights, Prime Minister Skerrit did not consulted with President Williams who has openly expressed interest in continuing in the post, the Sun has been reliably informed.

"He has disrespected the President and the people of Dominica and also the family of His Excellency Williams who are unhappy and very hurt at what is going on," an informed source stated.

According to the source, "family members have vowed to openly protest and speak out about that decision and will do all to ensure it does not materialized."

"The people of Dominica have a moral obligation to indicate that they are not in sync with this morally reprehensible act of elevating Alix Boyd-Knights to the presidency," Linton stated on Q95 Fm.

He said that as a citizen of the Commonwealth of Dominica who is concerned about greater level of decency and civility in the public affairs of Dominica, that appointment is "an assault on our hopes and dreams."

"I think the people of Dominica have a duty now, a duty they cannot avoid, to go out and protest this atrocious decision by the prime minister and his cabinet…she (Boyd Knights) has not done a proper job as Speaker of the House, she has been biased, extremely unfair and she has been unjust and hostile to the members of the opposition United Workers Party," Linton said.

He said the role of president requires an "even higher level of balance, fairness and justice" and requires an individual to be "above the political fray" which, he said, Boyd-Knights is "completely incapable" of.

"I think this decision demonstrates Mr. Skerrit's utter disdain and contempt for the wishes of the people that we should do better in our governance affairs," he said.

Michael Astaphan, the acting political leader of the Dominica Freedom Party (DFP) told DBS Radio on Friday that the DFP could not support Boyd-Knights' nomination.