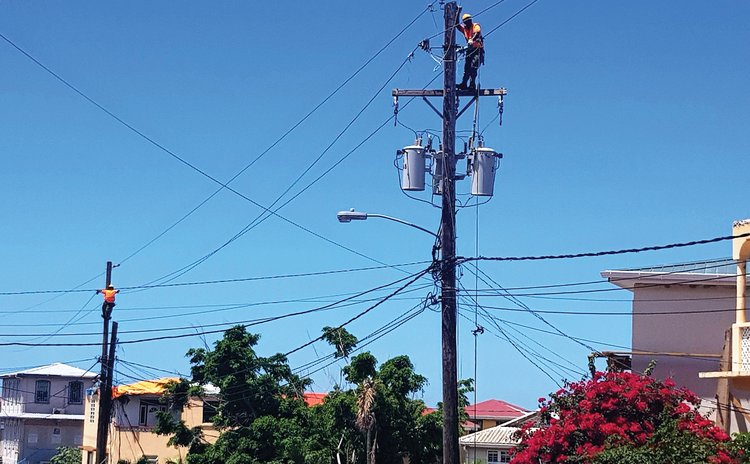 Harvesting hot air and water from deep beneath the rocks to generate electricity was supposed to be the answer to Dominica's economic woes and a cheap supply of power. Not buying DOMLEC, a major consumer of fossil fuels.

So the question on many minds, including the President of the United Workers Party (UWP) Isaac Baptiste following Prime Minister Roosevelt Skerrit's statements that as of March 31, 2022, his Government signed an agreement with Emera Inc. to purchase its 52% stake in the Dominica Electricity Services Company (DOMLEC) shares, it leaves one to wonder, where does geothermal energy fit into all of this and how much is this costing the people of Dominica?

One employee at DOMLEC projects that the government dished out millions to regain the shares. If true, Baptiste argues that such documents should be available to the public as well as the justification for purchasing DOMLEC shares.

"The purchase agreement with respect to the shares, that should be no confidential agreement, it is public funds, taxpayer's money, its major industry that determines the prosperity of the country and the public have a right to know what is the agreement, how much was paid for the shares and what are the terms for the purchase," Baptiste told the Sun.

Whatever the price that Dominica's government paid, it is well known that DOMLEC, the sole producer and distributor of power in Dominica, has been very profitable to its shareholders. Except for the period immediately after Hurricane Maria when DOMLEC reported millions of dollars of losses.

After Maria, David McGregor, DOMLEC's board chairman in the Chairman's Report of the 2020 annual report said DOMLEC recorded a post-tax profit of only EC$14,218.

But in 2015, two years before the major hurricane in September 2017, DOMLEC had gross revenue of EC$ 93.54 million, and Dominica's sole producer and distributor of electricity made EC$12.29 million in profit.

But Hurricane Maria caused DOMLEC to record a EC$2.5 million loss in 2018 as electricity sales were down by more than half pre-Maria figures. The departure of Ross University School of Medicine which operated out of Portsmouth helped sink DOMLEC's profits.

The company that Dominicans now own is still recovering from the EC$ 31.7 million damage wrought by Hurricane Maria in 2017. After the storm, DOMLEC reported its second multi-million-dollar loss in a row; in 2018 DOMLEC said it lost EC$2.5 million.

As for Skerrit, he says the return of DOMLEC to the ownership of the Dominican people is predicated on the firm belief that our citizens are better served when the country's main utilities, such as water and electricity, are in the hands of the State.

"We do not want to create the illusion to customers that assuming majority ownership of DOMLEC, will immediately translate to lower electricity bills, but we are preparing the foundation for that," Skerrit said.

"It is important to note that we will inherit the debt associated with the post-Hurricane Maria restoration of the electricity grid. Additionally, the cost inherent in reducing our island's vulnerability to climate hazards, the adverse effects of the Russia-Ukraine war on energy and commodity prices, and an ongoing rate review by the Independent Regulatory Commission (IRC) could potentially impact how swiftly we are able to reduce the cost of electricity," he added.

Among DOMLEC's creditors are the NBD and the CDB.

"Financing for the restoration was made possible through the previously arranged standby facility of EC$30 Million with the National Bank of Dominica (NBD). Additional financing includes a EC$43.5 Million loan and a grant of EC$.5Million which has been approved by the Caribbean Development Bank (CDB) to fund the restoration, an organizational review, and a Climate Vulnerability and Risk Assessment (CVRA)," the chairman said in the report.

In the statement, Skerrit pledged government commitment to action, which will ensure that these costs are not too "burdensome'' for consumers.

In the meantime, he notes that the acquisition of the company by the Government does not mean consumers are now exempt from the payment of their bills, but instead says as the owners, Dominicans now have a more urgent responsibility to ensure the company's sustainability and profitability over the long term.

Skerrit went on to assure all concerned that the Government does not intend to get involved in the day-to-day running of DOMLEC. Rather, he says, the management team at DOMLEC, led by the capable Mrs. Bertilia Mc Kenzie, will administer the affairs of the Company, guided by their experience and familiarity with the Company's structure and operations.

The majority share ownership of DOMLEC has changed twice since 1997—on both occasions, these shares were owned by foreign companies—with the most recent being Light & Power Holdings Ltd. (LPH) of Barbados, a majority-owned subsidiary of Emera Inc.

Twenty-one percent of the shares will continue to be held by the Dominica Social Security and the remaining 27% is owned by private investors—mainly Dominicans, Skerrit stated.