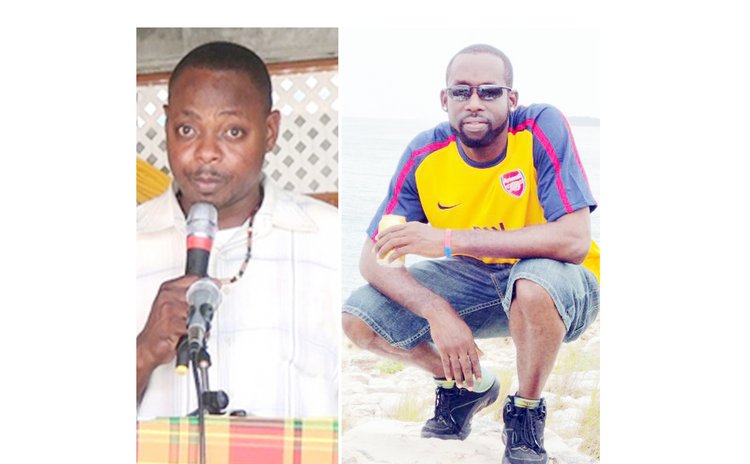 Part I of Primary Schools in National Basketball League? peeked into the participation of Grand Bay Primary School (GBPS) and Roseau Boys' School (RBS) in Dominica's national basketball league, in 1988 and 1989 respectively.

The article concludes as follows:

It was noted in the final paragraph of Part I that it would be interesting to find out how far the 24 or so players from the GBPS and RBS teams combined reached in basketball.

It turns out that some years later three of those players played Premier Division basketball. Another captained a team that was a "big name" in the Intermediate Division of the national league.

Let us take a closer look at how far some of those 24 brave young basketballers from the late 1980s reached in our national league basketball.

Brothers Swimburne & Ryan "Ian" Anselm from Grand Bay played with GBPS in the 16 & Under Division in 1988. Older sibling Swimburne went on to form and captain Smashers, while Ryan played with Home Boys. Both of these Grand Bay teams competed in Division III (3rd Level Men's Division) of the national league.

Subsequently, these brothers were drafted by Pros who competed in the national league's senior Division, and wore Pros uniforms for a few seasons.

Ryan and Swimburne's basketball journey continued, as they also represented the Nature Isle on Dominica's "Inter-Schools" team at the Windward Islands Schools Games for two years, and later on the Dominica Senior National Team for three and six years respectively.

Ryan, later served as Coach of Pros in the Premier Division for 12 years, and as Assistant Coach to the Dominica Senior National Team for two years.

Furthermore, and importantly, Ryan served as Vice-President of the Dominica Amateur Basketball Association for a two-year term.

Gregory Bellot was a member of the GBPS team in 1988. Upon graduating from primary school he joined Dubique Stars and played in the Intermediate Division.

Ivan "Bakery" Jno. Baptiste played with RBS in Division III of the DABA in 1989. Upon graduating from school he helped form, and played with a team comprising Windsor Park youngsters who called themselves Timberwolves; they competed in the Intermediate Division.

He then moved over to X-Men and played in three Divisions with that team over time, but was forced to retire in 2016 after undergoing surgery on his ankle.

Ivan also captained X-Men Premier Division team and performed creditably, guiding his team to capture two (2) of their three Premier Division Play-Off Championships. Additionally, he served as player-coach for a couple of games.

Julian Pacquette from Grand Bay debuted with GBPS, in DABA's 16 & Under Division in 1988.

The last team in the national league that Pacquette played with was Sixty-Sixers, which he also captained for a few seasons; they competed in the Intermediate Division. Furthermore, he was very much involved in other aspects of basketball in his community, such as the 4-on-4 Hoop Jam, the Grand Bay Basketball League, etc.

Interestingly, that may have been the same Smashers team who crushed Roseau Boys' School by 65 pts in 1989. That was the second biggest blow-out in the national league that year.

Observation: Although the 24 players from Grand Bay Primary School and Roseau Boys' School combined were badly shaken in their inaugural appearances in the national league, some were not daunted by the rude awakening received and went on to assume fairly high positions in basketball at the national level, in playing, coaching and administration.

Special Thanks to Bakery, Ian and Pacquette for providing information and photos.