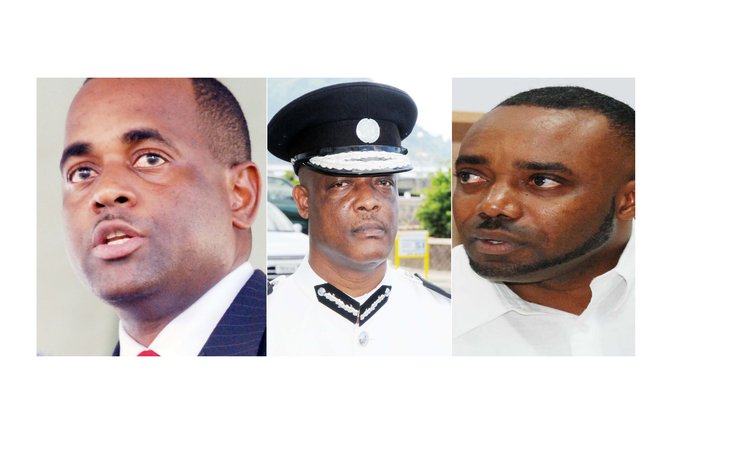 In a press statement issued today Prime Minister Roosevelt Skerrit said he had "absolute confidence" in Police Commissioner Daniel Carbon and dismissed his Security Minister Rayburn Blackmore's position expressed earlier this week that Dominica may have to look overseas for a top cop.

"I wish to make it very clear that as Prime Minister, I have the absolute trust and confidence of Chief of Police Mr. Daniel Carbon," Skerrit said in the statement issued to the press from his office. "I don't think that the statement by the Minister should be used as a whipping dog by some but that is how our society would behave".

While outlining his dissatisfaction with the operations of the Police Force, Security Minister Blackmore, a former police officer, said on State-owned DBS radio that "Ultimately, the Commissioner of Police or the Deputy Commissioner of Police has to take responsibility for the police force and we are not ruling out making some changes from the top which may include bringing in somebody from overseas".

That story, from the Caribbean News Agency (CANA), was reproduced in many Caribben newspapers including the Trinidad Express and batted back-and-forth on local talk radio.

But Skerrit said today that he was the one calling the shots in the appointment or dismissal of the Chief of Police.

"The Chief of Police is appointed by the Prime Minister and the Prime Minister continues to have confidence and respect for the Chief of Police Mr. Carbon. Obviously the point made by the Minister in respect to having more Police Officers on the streets is a concern for not only the Minister, but for the wider public and we have to find a formula to allow for more uniformed Police Officers to be on the streets, to allow for uniformed Police Officers when on duty at the Police Stations to be in uniform. It is a matter that I have raised with them over a continuous period of time for their own safety and also for the safety of the citizens," Skerrit said.

He added: "The public can be rest assured that the Prime Minister who appoints and who disappoints has great confidence in the Chief of Police and we will continue to provide him with the resources which he requests".

In his statement Blackmore said the police was responsible to the people and he expects the police to perform their duties including having a permanent presence on the streets of Roseau.

"The people of Dominica have to get their money's worth," he said, adding "because at the end of the day I cannot run the police force, neither the prime minister nor the permanent secretary…and the police department cannot be an entity in and of itself.

"The police department in any country, especially in a civilised an democratic country, belongs to the people," he said, adding "the people vote for a government and when the people put their trust in the government, they are saying to you, we are asking of you to put in place certain functionaries to provide some basic services and police is one the basic services."

Skerrit said he does believe that Blackmore lacks "any profound confidence in the Chief of Police".