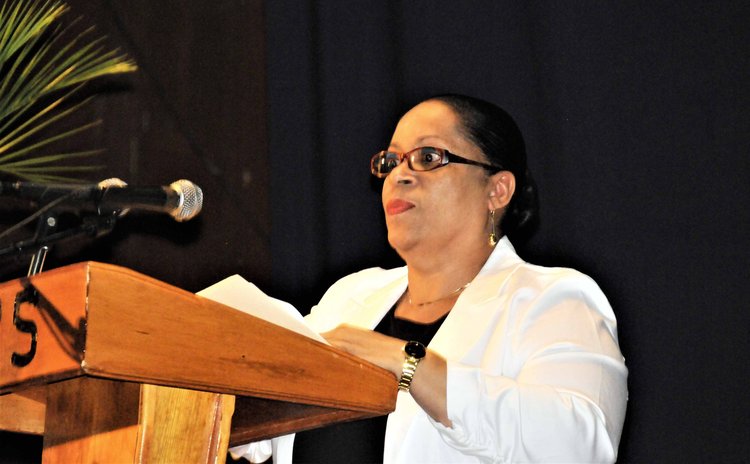 Giving her school's report at the 2017 graduation, principal Alicia JeanJacques

Miss Edina Darwton, the former Principal of the Goodwill Secondary School (GSS) has taken over as the head of Dominica's oldest educational institution, the Dominica Grammar School (DGS), several sources told the SUN.

Darwton has stepped into the seat made vacant as the first appointed female and the longest-serving principal, Alicia Jean Jacques bids farewell to the school headed for 16 years.

While officials from the Ministry of Education (MOE) have confirmed that this will be Jean Jacques final term, they were unable to confirm who will be her replacement stating that no word has been given from the Public Service Commission. Such information will be announced "in a timely manner," an official of the MOE said.

Attempts were also made to get confirmation from Darwton herself but these have been futile; however, various reliable sources including top officials have indicated that it's going to be Darwton based on a recently held meeting.

Jean Jacques also shied away from comments, only telling The SUN: "I would just like to go quietly,"

Her teaching career at the 128-year-old school commenced at the age 16, immediately upon completion of high school.

The mother of two has been a public servant for 43 years and a secondary school principal for 21years – 16 years at the DGS and five years at the Isaiah Thomas Secondary School (ITSS).

Before her long stint as a secondary school principal, she served as deputy principal at the DGS from 1991 – 2000.

Quoting a citation posted on the MOE Facebook page: "Ms. Jean-Jacques was, and still is, a staunch proponent of mutual respect between the schools' staff and students."

"Her dedication to the seventy-five strong DGS staff and her students is unquestioned. She devotes herself fully to all, helping students connect with course material, each other and the outside world. She holds her students and staff to the highest standards, and makes use of a wide range of management techniques to ensure that everyone has a clear and keen understanding of the school's vision and mission," the citation added.

Described by her students and staff as committed, connected and caring, Jean Jacques who holds an MBA in Educational Management, a Bachelor of Arts degree in French and a Postgraduate Diploma in Education with distinction in theory and practice, has also served as President of the Dominica Association of Principals of Secondary Schools (DAPSS) and an advisor to new and inexperienced principals.

She also served as a member of the Francophone Commission for many years and was a Caribbean Examinations Council (CXC) assistant examiner for nine years.

"She has been a great mentor to many of us, and whoever will be replacing her will have some big shoes to fill...She made the working environment enjoyable…. Her zeal for teaching and serving others is exemplary" are sentiments shared by a few of the teachers who spoke to The SUN.

Earlier this year Jean- Jacques was awarded by the Caribbean Association of Principals of Secondary Schools (CAPSS) for service to education.