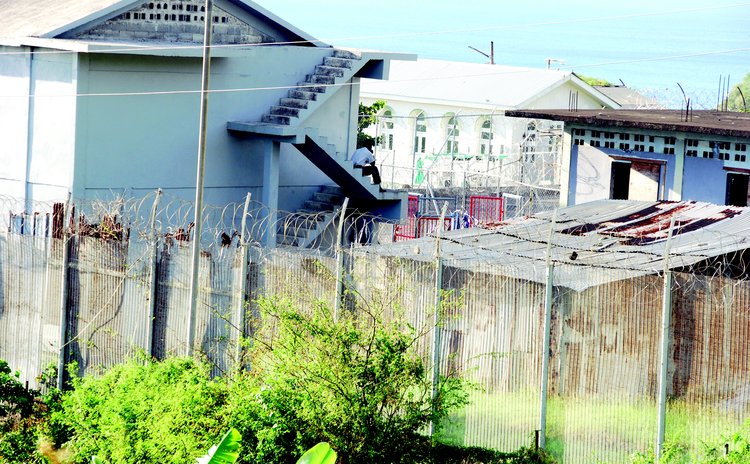 Officials at the Dominica State Prison are not saying much about a bloody fight that broke inside the institution on May 31, 2013 at about 2:30pm which resulted in one inmate being taken to the Princess Margaret Hospital (PMH) for injuries.

"We did have some incident at the Prison which was referred to the police for investigations," one source with information on the matter told The SUN.

According to reports from the magistrate's court, the police was called in to the Stock Farm Prison and a number of inmates were charged.

According to the report read in court by prosecutor Inspector Claude Weekes, the fight broke out after George, who had just showered, went in search of his pants and not finding it; he was told that Tyson had thrown it in the garbage bin.

George then took Tyson's pants and threw it in the garbage bin; Esprit asked "why he had done that and took a stick and struck him several times on his head," the police prosecutor stated. Other inmates joined the fight even after the lone prison officer on duty came to George's aide and George was punched and cuffed several times. The stick was an exhibit in the case.

Esprit pleaded guilty to wounding and battery while the others pleaded not guilty. A trial date of September 2, 2013 has been set. Before sentencing, Chief Magistrate Evalina Baptiste said: "This does not spell well for the prison authorities. There could have been a death; proper security is needed and I am very concerned about that situation.

Esprit expressed remorse and told the court that he was placed in the "Cove" (a special punishment cell) but he was informed by George that "that matter is not finished yet". He told the court that he has reported the threat to the prison authorities and requested that he should not be placed in any cell with George. Esprit is presently serving a prison sentence for handling. He was given a six-month suspended sentence for the wounding a three-month suspended sentence for battery.

Meantime, the SUN has been reliably informed that at no time is one officer on duty at the prison.

"This is not true at all; there is always more than one person on shift and on the day in question that was the case, something clearly went wrong and this matter needs to be looked at," the source said.