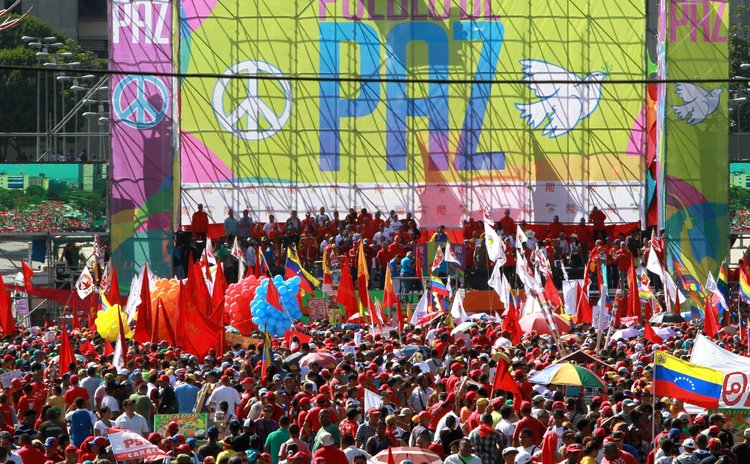 Caracas, Feb. 13 (Xinhua) -- Thousands of pro-government Venezuelans Thursday demanded the country's attorney general extend justice in dealing with an violent anti-government protest in Caracas that led to 3 deaths, 66 injures and the ransacking of the Public Prosecutor's Office building.

Attorney General Luisa Ortega Diaz told the followers of Venezuelan President Nicolas Maduro that justice will be shown in this case and the Venezuelan people should keep calm and peaceful after the violence.

"Our institution has been cowardly attacked, its workers have been threatened, but that is not going to prevent us from doing our job and give justice to those affected by this violence," said Ortega.

Caracas has been struck by anti-government demonstrations over the past two weeks. The biggest one that took place Wednesday in the central city quickly turned violent and caused casualties.

On Thursday, a local court ordered to arrest opposition leader Leopoldo Lopez, accusing him of murders and spreading terrorism by organizing street protests around the country for weeks.

On Wednesday, Lopez was denounced by Maduro for designing a coup to overthrow him, similar to the one that briefly ousted late President Hugo Chavez 12 years ago.

"Without a doubt, the violence was created by small groups coordinated, exalted and financed by Leopoldo Lopez," said Jorge Rodriguez, leader of the ruling Socialist Party and mayor of Caracas.

However, the opposition blames Maduro's government for failing to control inflation, increasing crime rate and shortages of life necessities in the South American country in recent years.

The government is also accused of using armed militant groups to attack protesters, which caused hundreds of arrests and disappearances, in a bid to divide the opposition and spread fear. The accusations have been denied by various government officials.

Lopez said on his Twitter account Wednesday that "the government is playing the violence card, and not for the first time. They're blaming me without any proof. I have a clear conscience because we called for peace."

Another opposition leader Henrique Capriles also told a press conference after Wednesday's violence that the protest was provoked by Maduro's government, adding the opposition would not achieve the government change they had pursued with violence.

"Brave is who with his ideas and thoughts can change the way of thinking of millions in our country," noted Capriles.

On Thursday, the capital city could still see sporadic student protests, street blockades and fire burning without the intervention of security forces. Many residents had to stay at home for security concerns.