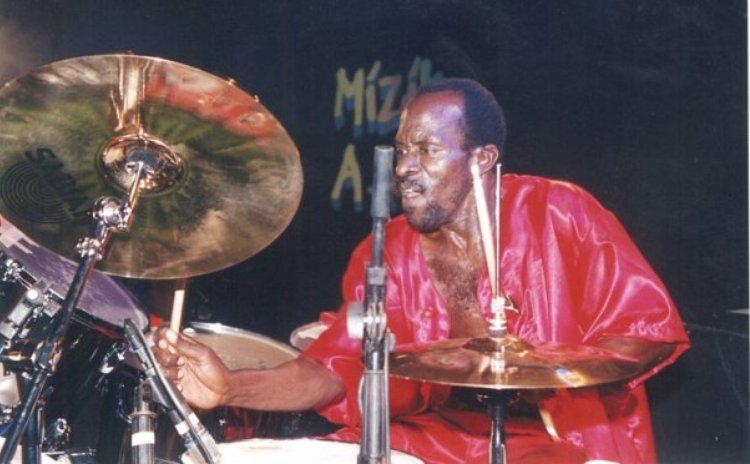 Professor Oils on his drums

The reaction from fellow musicians was poignant.

Herbie Jack said: "My, my, my... I played with him on a few gigs back home. Phenomenal professor on the drums."

Ophelia said: "Bye Oils. God blesses you even now as you journey to his bosom."

Gordon Henderson added: "Goodbye Professor Oils. I remember your innovation with the drum that you built yourself and how you moved the so-called real drums."

Well, the Sun was fortunate to speak with Oils before he passed about his life and his passion.

He's been given the name Frank Jules but almost everyone knows the 54 year old Dominican ace drummer as Professor Oils.

What's in his name?

Maybe the person who named him saw that Frank is as smooth and effortless on the drums, as silky and as serene as oil on water.

What about the professor part?

Aren't professors masters of their craft, aren't they as adept in their speciality as Oils is on the drums, aren't they persons we look up to?

Fred told us the story of a-very-young Oils who "pulled a crowd" of admirers, mainly spectators at the end of a football match at the Windsor Park, as he pounded away on a drum set Oils himself created.

"We knew then he was going to go places," Fred said.

And the places he has been, the people he has entertained!

"I first want to thank God for the talent and knowledge," Professor Oils told the Sun. "I started playing music 45 years ago and I have been doing it with my heart and soul. I've played with bands and artistes around the world, such as Swingin' Stars, Arrow, Midnight Groovers, Sparrow, Baron, Ophelia, Fanta Pan, Dominica Government Band, D Special Pan, The Drifters, Levitasion, and many more".

"Oils has a disciplined drumming strength that he brings to every genre that he plays," said a musician who knows the drummer well but preferred anonymity. "Oils has great respect for artistes and he knows how not to overshadow but to motivate and to accompany them with the right balance of control and enthusiasm."

Having accompanied great artistes for many years Oils is about to release his very own production. It's called "Come dance with me", an album with a variety of music genres including Blues, Reggae, Zouk, Soca, and Funk.

"This is my first album and it is dedicated to my family and friends," said Oils. "Special thanks to Queen Kate, Wendy Ostvik, Barb Edwards, Trina Edwards, Jen Edwards, Sonia Paudash, and my Crew...Jamie Veltri, Ilie Kochie and Joe Eddy Bluez".

The album will be released in the summer of 2015. Oils lives in Canada.

While Oils has been producing music he's been battling cancer.

"He has been up and down, fighting for five years and plans on winning the battle," said his devoted wife Katherine Ostik. "Frankie had a great day today. He was up all morning and part of the afternoon. This is rare that he can stay up more than a couple of hours at a time".

"When you ask how he is doing he would say "I'm living the dream."

"He is a fighter," said an artiste. "He insisted on training young boys in drumming because at one time he felt that the acoustic drummer was on the brink of extinction. He refused to take that possibility lying down..."

May he drum for the angels in heaven.