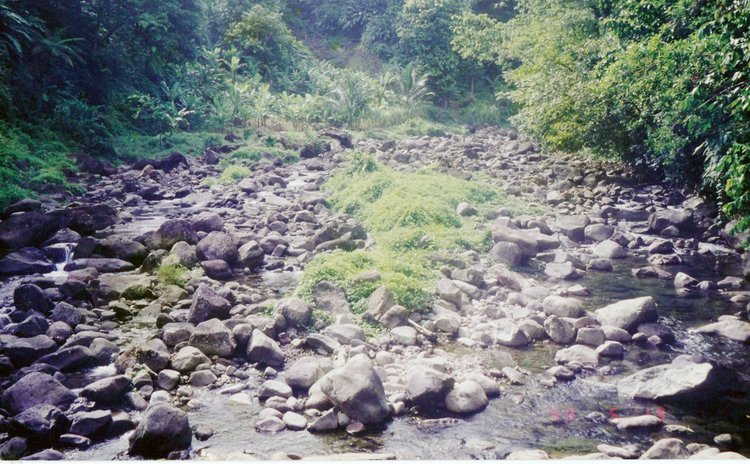 Almost-dry river in the north east of Dominica

Rivers and water are integral parts of Dominican life. Even the country's national anthem proudly attests to that when it says: "Rivers, valleys, hills and mountains /All these gifts we do extol." But if we truly believe that our 365 rivers are "rich and rare" gifts of nature to Dominica why do we have such a don't-care attitude towards rivers and our abundant water supply? Unfortunately, we take our rivers for granted but it seems we'll never miss the water until our water sources run dry.

As we indicated in an earlier editorial, conservationist Anthony Toulon raised the alarm about the state of our rivers a few years ago in an email comment. He said that "the entire Caribbean is slipping into the onset of desertification." Toulon suggested then that since Christopher Columbus arrived here in the 1400's "not a single river has grown by one inch" and that every river in the Caribbean is losing at least two to three inches every year." That figure may be disputed, but the fact is our rivers, and hence our water supply, are obviously drying up right before our eyes. Jamaica, Toulon estimated, had lost 50 rivers and St. Lucia was following in its footsteps due to a combination of deforestation, house building, road building, legally sanctioned tree cutting by utility companies and the replanting of inappropriate species.

Dominica's rivers and hence our water supply is being threatened by poor watershed management and deforestation. A study of a few years ago by former forest officer Michael Zamore revealed that Dominica had been losing it forests at an alarming rate and hence the state of our rivers. Recently, a senior forest officer indicated that no Government department is explicitly directed to budget and plan programmes to protect Dominica's water resources, not even the Forestry Division.

Maybe we need to take a closer look at the objectives of United Nation's World Water Day (WWD) programme and incorporate them in our national agenda.

In his message in observance on WWD, observed internationally on 22 March 2015, the United Nation Secretary General warns that with the onset of climate change, growing demand on finite water resources from agriculture, industry and cities, and increasing pollution in many areas are hastening a water crisis. That crisis, he said, can only be addressed by cross-sectoral, holistic planning and policies – internationally, regionally and globally.

The UN Secretary General said that despite progress under the Millennium Development Goals, adopted in 2000, some 750 million people --more than one in ten of the world's population -- remain without access to an improved water supply. The statistics on sanitation are even less encouraging. Some 2.5 billion people still live without improved sanitation, and a billion people practice open defecation, making sanitation the least successful area of the MDGs.

In fact the World Water Council warns that "There is a water crisis today. But the crisis is not about having too little water to satisfy our needs. It is a crisis of managing water so badly that billions of people - and the environment - suffer badly."

The WWC is of the view that there is increasing awareness that our freshwater resources are limited and need to be protected both in terms of quantity and quality. Water is, therefore, everybody's business, one of the key messages of the 2nd World Water Forum in The Hague in 2000. The Forum contended that a serious water crisis is the number one global risk based on impact to society (as a measure of devastation), and the number eight global risk based on likelihood (likelihood of occurring within 10 years) as announced by the World Economic Forum, January 2015.

DOWASCO, Dominica national water and sewerage company, understands the implications of the drying up of our rivers because, according to the company, most of its water comes from "about 80 rivers that pour out alongside the east and west coastline due to rugged forests and generous rainfall". For many years now DOWASCO has been pressing for suitable policies for governing water and land resources, for an integrated water resource management plan, a system for determining the water volumes in major catchment areas and a more effective land use plan and, most importantly, the designation of certain catchment areas as protected areas. We don't know how far DOWASCO is in achieving these goals.

As we observed WWD yesterday, Sunday, March 22 we hope that the issue of protecting our dwindling water resources was on the mind of some of our policy makers and that they have decided to move quickly before it's too late.