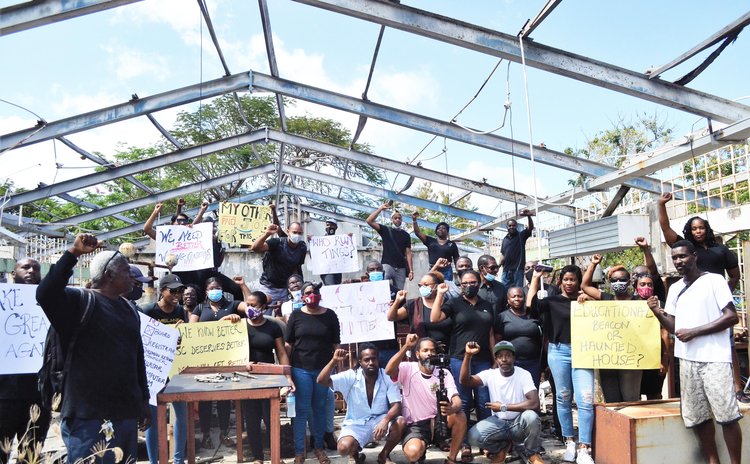 Demonstrating staff of the DSC

These chants of faculty and staff at the Dominica State College (DSC), resounded in the Stock Farm area last week during staff protest action, and following Government's swift response, it is clear that it too heard the call.

On May 10 and 11, 2021, employees of DSC took industrial actions, measures which they said were forced upon them as the government and management of the college failed to address their pressing concerns.

The employees shared grievances included working conditions, negotiation of a new collective bargaining agreement with the staff's union in order to address the discrepancies in contracts, and the reversal of a decrease in the base salary from $4000 to $3200, among a host of other concerns dating back to 2014.

The staff promised that its action would not cease until their issues were properly addressed by the relevant authorities.

Following multiple conversations and meetings over the last seven years, the faculty and staff were disappointed with the management's failure to negotiate in good faith.

On both days of the industrial action, the employees were escorted out by members of the Commonwealth of Dominica Police Force (CDPF) and security personnel at the institution; they were told that they had revoked their employment and that their services had been withdrawn.

Dedicated to the cause and armed with placards, the DSC staff gathered outside the premises where they made their voices heard.

In full solidarity with the DSC staff, Thomas Letang, the General Secretary of the Dominica Public Service Union (DPSU) said over the years the Union and the employees have witnessed "serious" violation of the labour laws of Dominica as the institution is being run and managed by what he claims is "one man" in the absence of a functioning board of governors.

"As I speak to you now, there is not a board of governors in place, one which is required by the State College Act. So there are no Bursars or a Human Resource Manager; you do not have a Registrar or a Vice President but instead, one man who is advanced in age, is doing everything here, alone all by himself. This thing has been going on for too long and it needs to stop and to stop right now," Letang declared.

Regarding payment to the staff, Letang said the DSC President, Dr. Donald Peters, is fully aware that for the financial year 2017/2018 the staff should have received their balance of a double-bubble and a 3% salary increase.

He said the current president is incapable of carrying out his functions at the institution which was demonstrated at a recent meeting where Dr. Peters informed them that the subsistence revenue from the government has been reduced from $9 million to $4.5 million because of the free tuition introduced by the government.

Letang said the concerns of the staff go beyond salary negotiations as they have exercised patience and continue to be dedication to their work.

"The physical condition of the college is in a deplorable state; the classrooms do not have the furniture that they should have, no electricity in some rooms, no doors and windows, no library, auditorium, computer rooms, technical/vocational workshops, and that situation would aggravate anybody," the union boss lamented.

Following two days of action, the government budged; on May 12, employees and the union met with government officials.

Speaking to the Sun, the General Secretary said that the team met with the Cabinet Secretary, Careen Prevost, the Permanent Secretary in the Ministry of Education, Chandler Hyacinth, as well as management of the DSC.

As a result, the industrial action by the employees was suspended as the government has given its commitment to addressing all their concerns.

"We had a very good meeting and at the end of it, all employees were satisfied. As it relates to the payment of monies owed since 2017/2018, we have been assured that they will be paid their double bubble at the end of this month and they will receive a 3% retroactive salary at the end of June," he said.

Another issue that has since been addressed is the non-appointment of a governing board for the institution. The General Secretary said the DPSU submitted its nominee and the board was appointed on May 11.

"So here it is, a matter that could not have been settled for the past 7 years could be settled in two days. The actions have been suspended because we were able to deal with the issues and we have agreed on a way forward," Letang stated whilst expressing optimism that the government will make good on its promise.