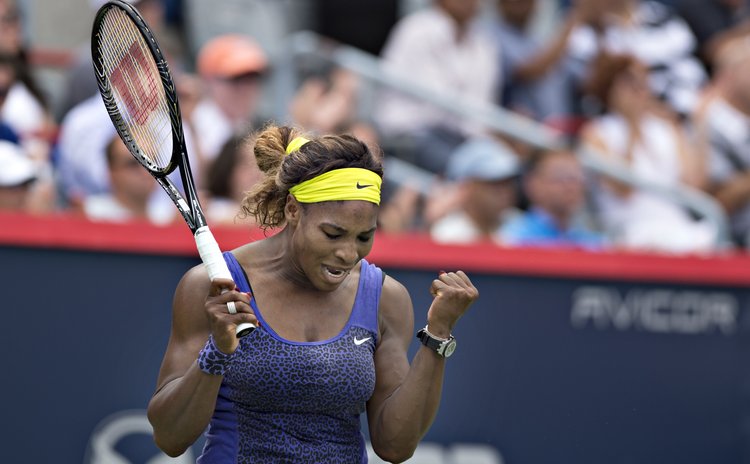 MONTREAL , Aug. 9, 2014 (Xinhua) -- Serena Williams of the United States reacts after winning the quarterfinal match against Caroline Wozniacki of Denmark during the Rogers Cup in Montreal, Canada.

NAIROBI, Aug. 10 (Xinhua/Sun) -- The coach who trained Serena and Venus Williams to tennis stardom has said their father, Richard Williams, put in a lot of emphasis on psychology to prepare his girls.

Bill Murray, who has coached a lot of national and world class tennis players including 19 national junior champions, told Xinhua in Nairobi on Sunday Williams instilled in her daughters that tennis is life and they had to be tough to succeed.

"He would take them to where the underprivileged Americans were living and while pointing at them would say to them:' Society got them to be like that. Society wants you to be like them and if you are not successful here you will be like them,'" Murray said.

The celebrated coach is in Kenya for the 2014 East Africa Safari Junior Tennis Camp that is taking place at Sadili Oval Sports Academy in the Kenyan capital where he is training a group of selected tennis junior players.

Saying that he has known Williams since he was 10 years old where they live in Florida, Murray said Williams believed that if the girls were to perform well in the game they had to have own coaches.

"Williams came to me in 1991 and told me to focus basically on techniques while coaching the sisters," Murray said.

He said there is an unwritten rule within the Williams' household never to let the siblings play seriously against each other in order not to develop rivalry, which he says could grow hatred between the two superstars.

"They were trained to last for a long time. Most of their practice was secret training. We didn't have a lot of money but we had a lot of talent," Murray said.

Pointing at the difference in playing styles between Serena and Venus, Murray said the latter starts working up well but something takes her energy away as the tournament progresses.

He is currently working with 20 athletes, including Britnee, the 10-year old niece of Venus and Serena Williams and Natalie Cedano (19) who has turned professional and already started to win prize money events. Enditem