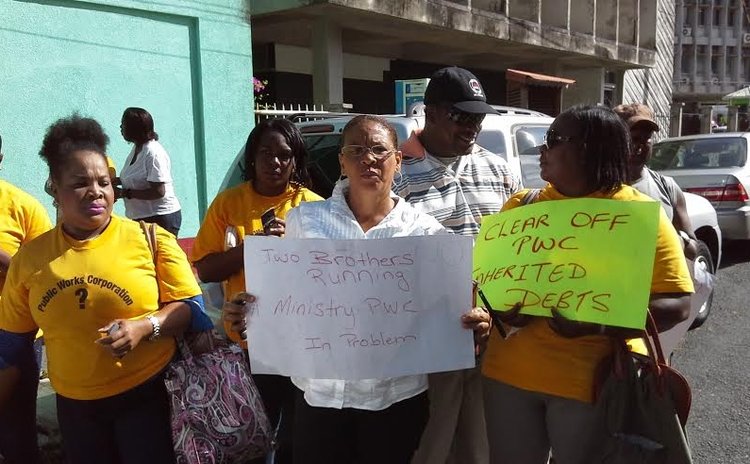 Workers at the Public Works Garage say they are again frustrated because of the late payment of salaries. The workers are owed three fortnights and they say there are "no signs of when that will be paid."

"I have commitments, I cannot meet them. I don't know what to do and where to turn. Government is spending (thousands) to rename airport and roads and we the poor people are suffering and they want us to vote for them," one very irate employee told the SUN.

Workers of the garage have taken several protest actions in 2014 with little impact on the situation. Now their union, the Dominica Public Service Union (DPSU) is warning that the matter cannot and will not be tolerated.

In August 2014, some of the employees, led by DPSU General Secretary Thomas Letang, staged a protest outside the Arawak House of Culture, opposite the Financial Centre, hoping to have a meeting with Prime Minister Roosevelt Skerrit.

They eventually met with Prime Minister Skerrit and an undertaking was given to pay the outstanding amount. That was done, but since then the matter has gone full circle.

"We will show them how dissatisfied we are. They are eating, their families are paying their bills and we can't. This is unjust and not right," another worker stated. Meantime, Letang said that Central Government owes Public Works and if Government pays, Public Works will be able to pay its employees.

"That again is very frustrating. We have embarked on all forms of protest. But unless the people who are affected throw their full support behind what is being planned and they are in solidarity with each other then all our efforts will be in vain. The last time we had a protest some people stayed in the office and or stayed away even if their bread and butter is being affected, some of them are not willing to come out," Letang stated.

He continued: "You are working and three fortnights you have not gotten paid and no one says a word. We have to take some bold decisions and it also depends on the Treasury when they release funds and that is also another issue. Public Works prepared a budget but whoever is responsible is not assisting giving the jobs out to private people thus significantly affecting the cash flow situation."