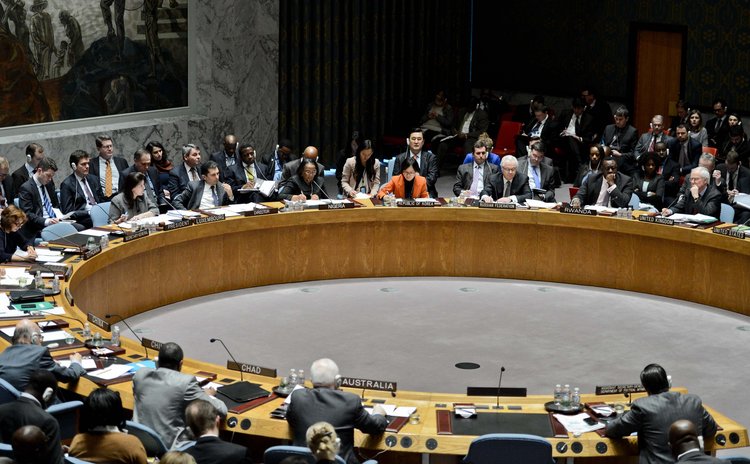 New York, March 4, 2014 (Xinhua) -- A Security Council meeting on the situation in Ukraine, which is the third one since Friday, is held at the UN headquarters in New York, on March 3, 2014.

UNITED NATIONS, March 3 (Xinhua/Sun) -- The UN Security Council is scheduled to meet in an open session on Monday afternoon to discuss the current situation in Ukraine as top UN officials are undertaking efforts to defuse the tensions in the country, which accused Russia of "an act of aggression."

The council meeting, the third one since Friday, is slated to begin at 3:30 p.m. EST (2030GMT) at the request of Ukraine, which said in a Saturday letter to the president of the 15-nation council that "Russia troops have already illegally entered the territory of Ukraine in the Crimea region ...under the illegal excuse of protecting the Russian-speaking population."

At the end of the two previous meetings, the Security Council did not make any decision on the crisis in Ukraine, but called upon all the parties concerned to cool down over Ukraine's Russian- speaking Crimea region and enter into direct dialogue to defuse the current crisis.

Earlier Monday, UN Secretary-General Ban Ki-moon and Russian Foreign Minister Sergey Lavrov discussed the ongoing crisis in Ukraine during a meeting in Geneva, while Deputy UN Secretary- General Jan Eliasson arrived in Kiev, the capital of Ukraine, to meet with officials of the new Ukrainian government there.

Crimea is now the epicenter of Ukraine's ongoing crisis after some 50 armed men carrying Russian navy flags on Friday took control of the two airports in the regional capital of Simferopol, one day after gunmen seized the local parliament and government buildings.

Crimea is a multiethnic region, but heavily Russian. It was granted a large degree of autonomy after Ukraine gained independence from the Soviet Union in August 1991.

However, Russia has maintained its only Black Sea naval base in the port of Sevastopol, Crimea.

The crisis erupted after a Feb. 21 accord between the opposition and then Ukrainian President Viktor Yanukovych, witnessed by foreign ministers of France, Germany and Poland. However, he was reported to flee the next day to Russia, apparently fearing for his life.