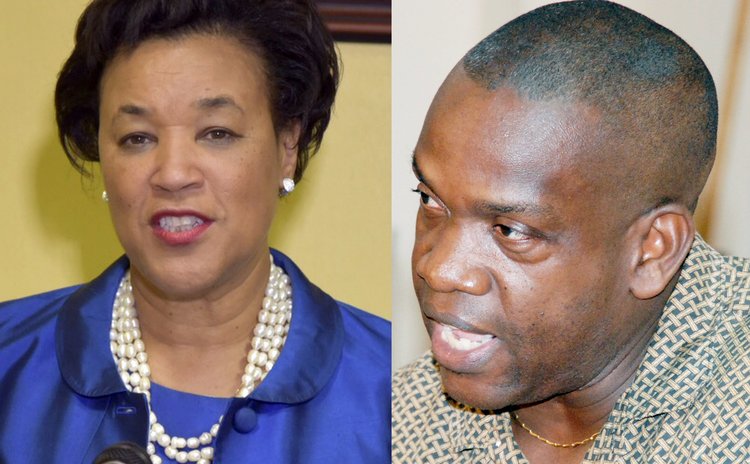 In a letter dated 21st December 2015, made available to the local and international press, Dominica Opposition Leader Lennox Linton has taken umbrage at a statement that Commonwealth Secretary General elect Baroness Patricia Scotland made here recently.

Linton also copied the letter to the head of the Commonwealth, Her Majesty Queen Elisabeth II, among other leaders of the former British group of nations.

Here is the full text of the letter addressed to the Rt. Hon. Baroness Patricia Scotland of Asthal, QC:

"On December 14th, 2015 during a visit to Dominica (at the invitation of Prime Minister Roosevelt Skerrit) to celebrate your election to the post of Commonwealth Secretary General, you made the following statement:

"The mixed English/Creole statement at a ceremony to have the Vielle Case Primary School carry your name, translates into straight English as follows:

"And for our Prime Minister, you know everybody wants to be critical of him. I am telling them: Suck Salt".

"With that completely unprovoked insult, you cursed the people of Dominica and elsewhere in the Commonwealth who are critical of Dominica's Prime Minister to "Suck Salt". Everyone in Dominica understands that vile utterance as a damning condemnation to hunger, poverty, suffering, pain and hardship over a sustained period.

"In their natural and ordinary meaning your words of condemnation clearly indicate a disposition to discriminate against, victimize and punish, citizens of Commonwealth countries who differ with you in the exercise of their inalienable democratic right to question, criticize and oppose their political leaders.

1) DEMOCRACY – the inalienable right of individuals to participate in democratic processes, in particular through free and fair elections in shaping the society in which they live.

2) HUMAN RIGHTS – the implacable opposition to all forms of discrimination, whether rooted in gender, race, colour, creed, political belief or other grounds.

3) TOLERANCE RESPECT & UNDERSTANDING – the need to promote tolerance, respect, understanding, moderation and religious freedom which are essential to the development of free and democratic societies and recall that respect for the dignity of all human beings is critical to promoting peace and prosperity.

4) GOOD GOVERNANCE – the commitment to promote good governance through the rule of law, to ensure transparency and accountability and to root out at national and international levels, systemic and systematic corruption.

6) ACCESS TO HEALTH, EDUCATION, FOOD AND SHELTER – the right of everyone to have access to safe, sufficient and nutritious food, consistent with the progressive realization of the right to adequate food in the context of national food security.

"Surely, as a sitting Member of the British House of Lords and the incoming Secretary General of the Commonwealth, you must know that such a statement is totally unbecoming especially of someone of your standing in the leadership for civility in international relations. You also know that under no circumstances would a public statement of this nature be accepted anywhere in Britain from someone at your level of public responsibility.

"This unjustified act of hostility to critics of Prime Minister Skerrit confirms that you are his political ally and part of his political machinery. It would therefore be unreasonable to expect political parties opposed to Mr. Skerrit in Dominica to trust the independence of the Commonwealth Secretariat under your leadership in the monitoring of elections and the adjudication of electoral disputes in this Commonwealth Member country.

"While we wait to hear what honourable course of remedial action you intend to pursue, we are taking the liberty of copying this letter to Her Majesty the Queen, the Commonwealth Secretary General, the Commonwealth Heads of Government and the Commonwealth Ministerial Action Group, in the public interest of dealing with this serious violation of Commonwealth values. Sincerely,

Lennox Linton Leader of the Opposition Parliament of Dominica