Questions about the Red House 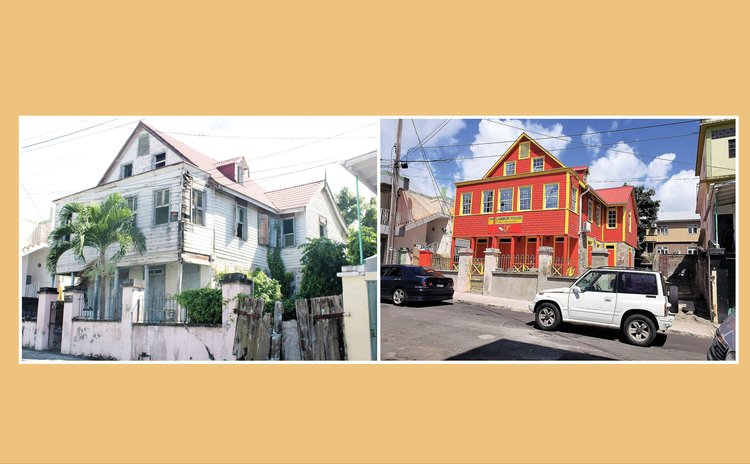 If ever one decision, one action, one structure could change the aesthetics of a corner, an area, a street, this is it. Standing majestically – the peacock kind of majesty, not royal power – on an unassuming street named after a king described by biographers as dull, this Labour building is nothing short of radiant.

While some of the structures around it are unappealing – the Dominica Labour Party (DLP)'s broadcast mouthpiece, Kairi FM, among them – this 3,161 square foot two-storey edifice on Lot 62, King George V Street is inviting.

It's transformation from a near decrepit building better suited to the ghetto, to a burning red marvel with mustard trimmings, is magical. The palm tree which once served as the only proper sign of life is gone, and so are the vines that clung to weather-battered fences and crept up the side to a window that seemed ready to expire. The rather sad wall that separates the 4,703.8 square foot property from the not-so-smooth sidewalk, and which showed all the signs of years of neglect, has been reborn, and the wooden fence which easily could have been mistaken for the rotting teeth of an octogenarian who spent decades drinking and smoking heavily, is now gone. What now stands proudly is an impressive symbol of the DLP's presence.

"It's a beautiful building, well painted, well done. It's one you just cannot miss," one person closely associated with the ruling party told The Sun.

However, beneath the glitter resides something sordid and unpleasant, both critics and supporters of the party contend.

"Boy, another scandal, oui," said a former DLP campaigner, now an active promoter of the opposition United Workers Party, who sought to compare the purchase of the property, valued at EC$1,737,800, to the recent allegations of disappearing funds from the citizenship by investment programme. "You're buying a million-dollar building . . . I never see them raising funds. Where is the money coming from?"

"That is another one [scandal] again," added a DLP insider who is close to the party leader and prime minister, Roosevelt Skerrit. "This thing has some problems written all over it."

The doubts and concerns revolve around Skerrit's revelation that a loan was taken in his name to purchase the property. His disclosure has led to a number of questions surrounding ownership of the property, as well as demands for disclosure on the financial institution from which the loan was secured, who is making the payments, and if it's Skerrit, how the party will repay him. Several attempts to solicit answers from attorney-at-law Duncan Stowe, who has admitted to acting "on behalf of a client" in the transaction, proved unsuccessful as he was travelling.

However, even people within the bowels of the DLP have doubts.

"The prime minister has made a statement that a loan has been taken in his name for that building, but that is nonsense. People feel that something is not right . . . It's a Labour party building, but the loan is in his name," said the DLP source who spoke on the usual condition of anonymity because of the close relationship with Skerrit.

"There's nothing to raise money, and I have not seen any signs that money is being raised, unless it's happening some other way. It will be interesting to find out how much he's paying on it every month. How is the Labour party going to pay him back? How much is the loan?" the person continued.

These are questions that are likely to be met by massive deflection projects, aimed at changing the conversation instead of revealing the truth. In the meantime, Labour house stands ostentatiously like a peacock revealing its rich, vibrant red.