Rah Peters: "Maria was a hurricane of hurricanes, trust me" 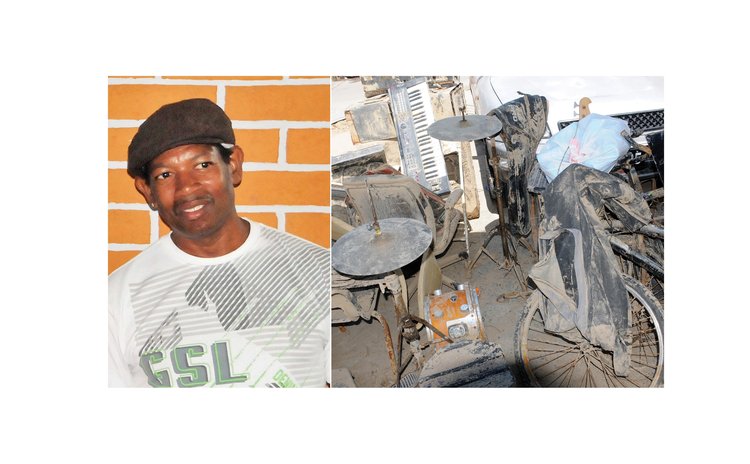 Rah Peters and his damaged equipment

Derrick "Rah" Peters, the Bouyon pioneer, lives in Bath Road in a house sandwiched between the Windsor Park Sports Stadium and the Financial Centre.

There he once operated a studio in the basement. But now the studio is gone; it was submerged by the waters of an angry Roseau River when Maria struck on September 18, 2017.

"Everybody had their experience but mine, I feel like I was the only one going through that. Wow! That was really an experience," he said.

"When the wind started like about 7pm, by that time the first part of my house came out and the wind started to come through. I had my daughter and my son and a lady friend and also another guy with me whom I had to call him in as galvanize was flying all over the place. The wind was strong.

"By that time I had left the front part of my house and had taken refuge in the kitchen area and that is where the action was at its peak. My daughter was really, really scared I had to tell her to grab herself but I didn't really understand what was happening outside."

Rah said he decided he had to go to the basement of the house (which he expected to be safe) so he looked out and was amazed at what he saw.

"The water had risen to about a metre and a half and the river had burst its bank. We had to forget the idea. It was just terrible to see what was happening as the wind swirled. I was wondering when and what time it was going to stop. The wind was intense from about 8pm to just past 3am the following day.

"I had musical equipment in my basement and 98% of what I had got totally damaged by of the water. We had studio equipment, band equipment and all. But what hurt me most is that my son who uses most of the equipment is gutted. I see that on his face every day since that was his place as he practiced his music to rehearse or record. It's hurtful and a shattering blow to him and me and to those who would come and use the studio. Our keyboards which cost US$2, 500, drum set same price; it was rough and I really felt it. When we calculated the loss it's about US$70, 000.

Rah continued: "Hurricane Maria…I just don't want to hear about her. When I saw Hurricane David, I thought that I had seen it all but now after Maria, Hurricane David is like a joke. Hurricane Maria came with heavy wind and water and that is what caused the entire widespread damage and destruction…that is a hurricane of hurricanes, trust me. I felt it was more than 300 miles per hour winds during that time. My house is still covered with what I call a "head tie"; it has all different colours, all political party colours on my house- blue, red, green and yellow and while I have some materials I am still yet to cover since I don't have all the materials needed.

"I have to now start from scratch. I did not get the equipment in one go but amassed it over many years. So it's not easy. So while I try to help myself, I am looking forward to anyone who can help me. If they can't it's okay because we are strapped for money. It's costly. Lost clothes; it is rough.

"I see they have some names for the 2018 hurricane season like Isaac, Lionel and others that I know and they are good people so if they come they should not be as terrible as Maria.

"We can't handle anything again…imagine when the rain falls people are frightened and terrified since they have nowhere to go.

"I stayed back to build Dominica and I am very happy while others ran away. I never got a scratch during Maria and I have gotten several injuries after. Maria has left people traumatized -mentally, physically and spiritually."