Raise up Haiti from its knees 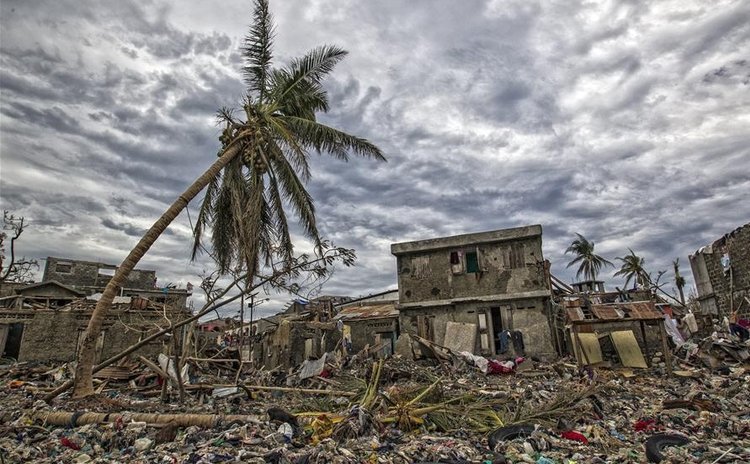 Haiti was due to have elections on October 9 to choose a new President. Even before Hurricane Matthew blasted the country on October 4 with category 4 force winds and a 190-mile outer band of powerful rains, Léopold Berlanger, the head of Haiti's provisional electoral council (CEP), announced that the restaged presidential and partial legislative elections would be postponed indefinitely.

The Council knew well that the infrastructure in Haiti, such that exists, is too weak to sustain a storm of any magnitude let alone a category 4 hurricane. It was inevitable that the country would be badly battered and brought again to its knees; the only question would be the extent of the extreme damage that would be wrought. Elections for anything would be far from the minds of the majority of Haitian people who live by their wits every day in a country where only 500,000 of its 10.2 million population have permanent employment.

So, it turned out to be. As the interim President, Jocelerme Privert, surveyed the country from a US helicopter 2 days after the storm had pulverised much of it, the enormity of the disaster below him would have been hard to absorb, even for Haiti where living in catastrophe has become a way of life. Before Matthew stormed its way across the country, more than 55,000 people were already living in tents and ramshackle homes, compliments of the devastating earthquake of 2010. It is certain that after Matthew's passage, they were completely desolated. Now there are many, many more in similar circumstances; that is, of those that survived.

The Haitian Interior Minister, Francois Anick Joseph, speaking two days after the 145 mph winds, torrential rain and driving storm surge, said at least 108 people have been killed, but his figures were provisional. Collapsed bridges and damaged telecommunications infrastructure have cut of a large section of country and hundreds of thousands of people are isolated. But, preliminary aerial assessments indicated that in the south, where the Hurricane stomped hardest, up to 80% of homes lost their roofs. In other areas of the country almost half the homes were damaged. A press statement by UN Secretary General Ban Ki-moon estimates that "at least 350,000 people need immediate assistance".

Agriculture crops were also swept away leaving Haiti with an even bigger food crisis than was already existing. 80% of the banana crop in the biggest banana-growing region is destroyed. Those crops support more than 20,000 families. Loss of life and food crops are a direct result of Matthew, but the sting in the Hurricane's tail will be felt for years to come. This simply piles on more misery on the deprived existence of the majority of Haitian people. An elected President and a working democratic system of government might be the furthest thing from the minds of the Haitian people as, once again, they test their mental resolve and physical stamina in the herculean effort simply to survive. That is understandable. But Haiti needs two things: real and meaningful economic assistance to bring its economy to a sustainable and productive level, and democratic governance with checks and balances on executive power. Elections would be the first step in trying to achieve both those things.

This is the second time that the elections have been postponed after the CEP cancelled a run-off presidential election in January. The January run-off between Jovenel Moïse of Parti Haïtien Têt Kalé (PHTK, the party of former president Michel Martelly, and Jude Célestin of the opposition Ligue Alternative Pour le Progrés et l'Emancipation Haïtienne (Lapeh) party was cancelled after the latter refused to take part, citing what he called "massive fraud" at the 25 October 2015 first-round election.

Célestin is reported to have said the postponement is "a wise decision" while he called for the CEP to announce a new date as soon as possible so that a new president can take office on 7 February 2017 –the date set by the CEP last June. Moïse expressed dissatisfaction with the failure to set a new date, and Jean-Charles Moïse (Platfòm Pitit Dessalines), who finished third in the cancelled October 2015 vote, called for a "fixed date" for the postponed election.

The Organization of American States (OAS) was more realistic. It recognised that in the aftermath of Matthew's destruction, account has to be taken of "the logistical and technical difficulties". But, it, too, wants elections to be held as early as possible, because all interested parties, inside and outside Haiti, know that a democratically elected president and parliament are essential to the governance of the much beleaguered country and to the process of negotiating assistance for it.

All the international players – the US, Canada and France particularly – will be pushing for the elections to be held as soon as possible. But, materials for the elections were reportedly destroyed along with buildings in which they were housed. The interim government struggled to put together the means to hold the planned October 9 elections; it will need help to finance proper elections. In this regard, the big players should not again decline to give Haiti the financial assistance required to conduct the elections. Certainly not if they want proper and credible elections that they can stand behind and that the Haitian people will accept. They should pony up the money that is needed.

And, that should be the start of an international resolve to provide a plan for the building of Haiti along the lines of the Marshall Plan implemented in Europe after World War Two. The condition of Haiti is as bad now as some parts of Europe were after the war, and worse than many others. The country cannot be allowed to suffer perennially with little or no hope of escaping the persistent poverty and deprivation that strangles it. Far too many Haitians have died because the international community has refused to own up to its responsibilities.

Haitian politicians, too, must play their part. Democratically elected government that implements best practices in governance would give the international community – governments and non-governmental organisations – the confidence to hep Haiti rise up from its knees where it has been for far too long.

(Sir Ronald Sanders is Antigua and Barbuda's Ambassador to the United States and Senior Fellow at the Institute of Commonwealth Studies, University of London and Massey College in the University of Toronto)