JUMP BALL No. 80. By Arlington James 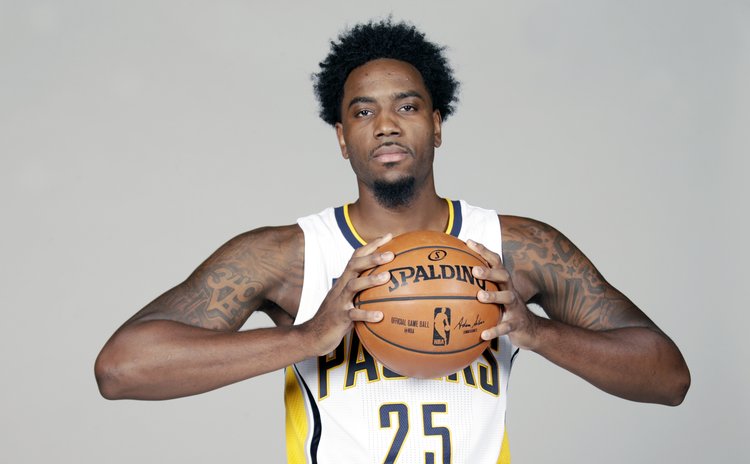 RAKEEM CHRISTMAS while a member of NBA's Indiana Pacers

A few years ago Dominica's Garth Joseph, then a former Flames Centre in the national league, made it to the NBA. This caught the attention of the local media and both Dominica News Online (DNO) and The Sun newspaper carried full-length articles about that achievement.

In June 2015, DNO carried a story titled, "Basketball Player of Dominican Parents Drafted to NBA". Yes, a second player of Dominican parentage, Rakeem Maleek Christmas was that player referred to, except that he flew the American flag in the NBA and beyond.

DNO graciously granted permission to Jump Ball for the use of their 2015 story as reference materials. So, let's meet the man.

Rakeem and his Mom moved to St. Croix, USVI when he was 2 years-old, but three years later, his mother passed away at the young age of 28 years-old. After the death of his Mom, he remained in St. Croix and was raised there by his grandmother, Evelyn Hamid.

While residing in St. Croix his family visited Dominica every summer and Rakeem was well known and a 'regular' on the basketball court in Wesley.

At age 13 years-old he moved to Philadelphia, Pennsylvania to live with his aunt, Amira Hamid, who became his legal guardian.

Upon graduation from high school, Rakeem would go on to attend and become a star player at the Syracuse University where he earned honors academically as well as on the basketball court. He is thought to be the first player in Syracuse University men's basketball history to finish his undergraduate degree in 3 years!

Christmas played "college 'ball" with Syracuse Orange for four years, starting every game as a sophomore, junior, and senior and averaging over 17 points and 9 rebounds per game as a senior.

Rakeem's entry into the NBA could be described as a sort of "hand-to-hand" affair. In 2015, the Minnesota Timberwolves selected him with the No. 36 pick in the NBA Draft, but then traded him to the Cleveland Cavaliers who later dealt him to the Indiana Pacers following the 2015 NBA Summer League. In the latter League, he averaged 8.0 points and 4.5 rebounds in four games.

In his debut match with the Pacers and wearing jersey No. 25, Rakeem scored four points, converting both his field-goal attempts off the bench in a 97–92 win over the Milwaukee Bucks. However, he got more playing time in 2016–17, appearing in 29 games!

Draftexpress.com described Rakeem as follows, "Sporting very good physical tools, Christmas doesn't have great size for a center at 6ft 9in (and 250 lb), but makes up for that somewhat with a very long 7ft 3in wingspan, strong athletic ability, and a frame that would continue to fill out in time. This, combined with his solid timing and ability to get off the ground quickly, helps him as a rim protector, where he blocks 2.9 shots per-40 minutes.

During and following his relatively short stint in the NBA (2015-2017), Rakeem played in the NBA's Development League as well as in professional basketball leagues in several countries.

One of the non-American teams that he played with was Mets de Guaynabo (or Guayanabo Mets), a Puerto Rican professional basketball team in the Baloncesto Superior Nacional League in Guaynabo, Puerto Rico.

He also played with Fort Wayne Mad Ants in the NBA's G League, Capitanes de Arecibo in the FIBA Americas League; and with Henan Golden Elephants in Henan China.

Off the court, Christmas added a very important feather to his basketball cap. He made NBA legend Michael Jordan a grandfather when his partner, Jasmine Jordan – Michael's daughter who had also attended Syracuse University while Rakeem was a student athlete there – gave birth to their first son, in May 2019.

So, that and more is Rakeem Christmas, an American with Wesley parental roots, but who did not abandon those roots even though he was not born in Dominica.

References: DNO 2015 story, and additional information and photo from various sites on the Internet.