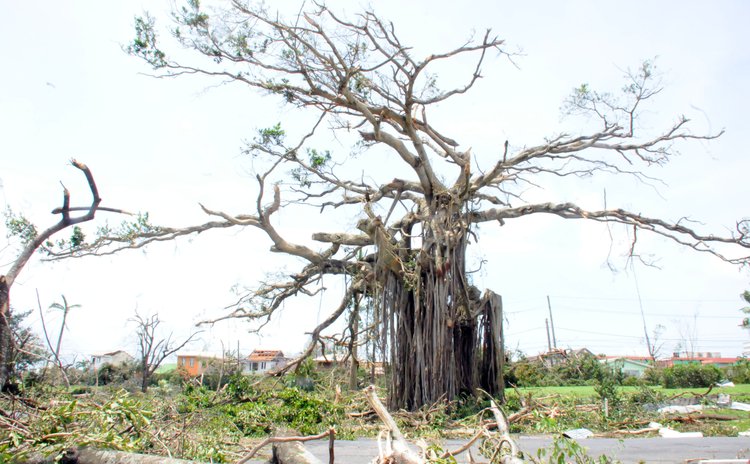 Dominica's forests, one of the most pristine and expansive in the Caribbean, was severely damaged by the category five Hurricane Maria on September 18, 2017.

In some forests not a leaf was spared.

A report produced by the Government of Dominica indicates that Maria inflicted damages on the forests valued at EC$80.2 million (US$29.7 million) and the country will need EC$40.2 million (US$14.9 million) to recover its previously rich forest resources.

"Clearing the forest and reforestation is a major task for us," said Director of Forestry and Parks Minchinton Burton. "We also still have lots of trees across rivers on the island so we have engaged chain saw operators to chop up the bigger logs into smaller pieces so that we can have much better movement of the water. The Central Forest Reserve is also of concern to us so we have engaged people from that area in a joint partnership to clear the forest."

Since the forest is an important component of Dominica's tourism, early on the Division of Forestry diverted its resources into the cleanup of eco-tourism sites.

One of these was the Waitukubuli National Trail (WNT); it is 184 km (115 miles) long and is made up of 14 segments. It runs from the southern village of Scott's Head to the Cabrits National Park in the North, and comprises a series of trail networks.

"The Waitukubuli National Trial was extensively damaged across the country, all 14 segments, and that was a major problem for us," Burton said. "The work is endless and while we have a few segments open, it will take us a while for the others to be fully open and functional."

Another tourism asset that Maria severely damaged was the 127 year old, 40-acre Botanic Gardens in Roseau.

"Huge, 120 year-old trees were lying on their side. Large limbs and branches were broken off once magnificent trees which were left standing, but with much-reduced and misshapen crowns. Some palms were leafless, while one of the largest trees in the Gardens was left with a long split running down its stem. To add to the scene, twisted sheets of "galvanise" were strewn helter-skelter, with one trapped between the roots of an uprooted tree".

In an article entitled "How Hurricane Maria Ravaged Dominica's Botanic Gardens" published in The Sun in April 2018 James continued:

After so much damage to this popular tourist site, Burton believes there is an opportunity to rebuild the Botanic Gardens.

"We have three proposals to look at and have a roadmap for the Gardens. The Gardens will never be a full Botanical Gardens but will be more open and family oriented," Burton said. "Jack's Walk is now passable and we will now continue work in that regard."

And then there is the country's wildlife.

For example, Dominican forests support the endemic parrot Amazona imperialis, also known as Dominica's national bird, the Sisserou; it is recognized as critically endangered with an estimated population of approximately 350 birds. Their natural habitat is the mountain forests at 500 metres above sea level.

"According to assessments we have conducted thus far, we can say that all of the country's biodiversity has been impacted, both the forests and wildlife," Forest Officer Steven Durand told Granma News Agency in October 2017.

"The birds are changing their habits because of the hurricane. Their habitat was totally destroyed and there is no food," forest official Francisco Maffei added.

Nine months after Hurricane Maria's ferocious winds battered Dominica's forests, practically stripping every leaf from every twig, from every branch, from every tree, the forests are green again. Almost. But it will take many, many decades and millions of dollars and thousands of man hours for our forest to be made whole again.