Windsor Park is the arena for First Test in Australia series 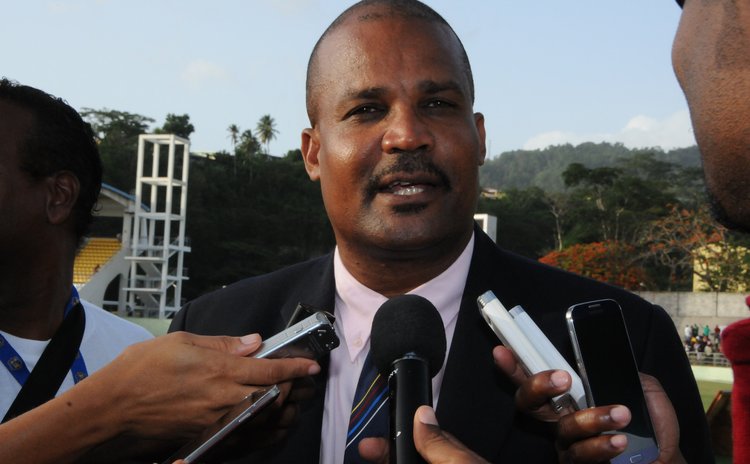 Emmanuel Nanthan, WICB vice president speaks to the press at the end of a match at the Windsor Park

Sounds of leather on willow; screeching Dominican West Indies supporters; heaps of chicken fat hissing like dozens of excited rattle snakes; impromptu orchestras of conch shells and bugles playing "Rally Round the West Indies" or something no less jumpy.

That's the sound of international cricket at the Windsor Park Sports stadium and it will all blend with the green, the red, the blue (especially the verdant green) when the marauding Aussies battle a resurgent West Indies Cricket team in three days, from June 3-7 2015.

Like starving multitudes in a field of over ripe bananas, Dominican cricket lovers have feasted on the few matches that the West Indies Cricket Board (WICB) has allocated to the Caribbean's newest stadium. And with the first Test of the Australian tour of the West Indies the WICB is apparently feeding the frenzy.

"The crowd turn out is fantastic, the ambiance and the atmosphere is good and the West Indies Cricket Board felt that in keeping with the tradition of Dominica over the years they should be awarded the Australian Test Match, hence we are having the first test match", said Emmanuel Nanthan, the Vice President of the West Indies Cricket Board, in an exclusive interview.

Nanthan said that to host the match some sort of bidding did take place among the various islands with a Test match facility but at the end of the process, the board decided that Dominica would be awarded the match.

Since the match will be televised the world over, Nanthan said, that will guarantee that millions will feast of eyes on the Nature Isle, its green towering mountains, lush valleys and cascading waterfalls. And, what if the Windies win? Dream on, you say? Didn't they beat England a few weeks ago in Barbados? Can they do it again?

"The eyes of the cricket world will be on Dominica, looking to see what happens," said Nanthan.

Apparently not even the great Aussie Captain Michael Clarke is not going to relax against a West Indies team with the energy of thousands of loud Dominican fans pulling forward them forward.

"Obviously they are coming with some form from against England so nothing changes for us as a team," Clarke told the Cricket Country website just before he left for the Caribbean. "Travelling overseas is a tough part of playing international cricket, to be able to win away from home and that's the challenge we face in the West Indies."

So Dominica is preparing for the Australian-West Indies battle, an encounter that reminds one of the fight between David and Goliath (Australia is ranked 2nd, West Indies 8th). Renovations at the stadium are ongoing and, according to Nanthan, everything will be in order for the match.

"Work is continuing to shine up the stadium. Of course we are looking at fixing up the dressing rooms. You are having an international event where you are inviting the world in, so we have to do a number of works to get things going," he said.

Workmen have been repairing the old railings, repainting the stadium, extending the dressing rooms for both home and away teams as well as power washing of the pavement.

Dominican cricket lovers will have another fringe benefit coming out of hosting the Australian –West Indies test. Nanthan said the WICB is to hold its second Town Hall meeting at the Fort Young Hotel on June 1st from 7.00 pm. The purpose of the meeting is to "engage directly with the regional public on the issues facing the game in the region", a WICB release said.