Record tourist arrival and earnings for the Caribbean 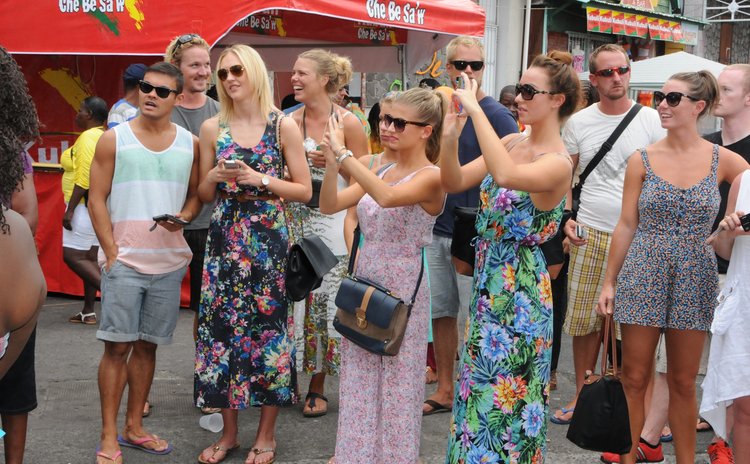 Cruise tourists can't believe what they are seeing.

The Chairman of the Caribbean Tourism Organization (CTO), Richard Sealy, and the secretary general, Hugh Riley, along with the CTO's director of research, Winfield Griffith, announced the record performance at a news conference streamed live to a global audience from the CTO headquarters today.

"Last year, we received more visitors than ever before - recording our fifth straight year of growth as a Region - and visitors spent more money in the Caribbean than they ever did before," said Mr. Sealy, also Barbados's minister of tourism and international transport

"There was strong demand throughout 2014 and I am particularly pleased with our performance during the summer period when our growth rate was almost twice that of the summer of 2013," he added.

The 26.3 million visitors represent 1.3 million more than in 2013, itself a record year for the Caribbean. These visitors contributed a record US$29.2 billion to Caribbean economies, a 3.9 per cent rise over the US$28 billion that visitors spent in 2013.

"With a strong year for air travel, a positive performance by the accommodation sector, solid growth in cruise visits and faster-than-expected rise in stay-over arrivals, the Caribbean Tourism Organization is pleased to report that the state of Caribbean tourism is sound," stated Mr. Riley.

The US continues to be the region's primary market, with nearly 13 million Americans – or just under half of the total arrivals – to the region. Canada rallied from a flat performance in 2013 to post a 5.7 per cent increase, while Europe topped five million visitors for the first time since 2008, registering a 4.6 per cent increase over 2013.

"There's no doubt that political and economic conditions, increased airline seat capacity, improved airport facilities, increased room stock - as recognized hotel chains established themselves in our destinations - and new initiatives in the marketplace, all contributed to this success," Mr. Riley added.

The 5.3 per cent rise which the Region recorded was above the global growth rate of 4.7 per cent announced by the UN body, the World Tourism Organization (UNWTO), and nearly twice the predicted two per cent to three per cent growth.

According to Mr. Griffith, leisure travel is showing steady demand again as the economies in the main markets continue signs of resurgence. This heightened demand significantly benefitted the Caribbean and is evident in the record number of visitors.