LIAT is the elephant in the COVID-19 regional room where Dominica benefits with lower rating, despite surge in cases, from Barbados and Antigua gets higher rating 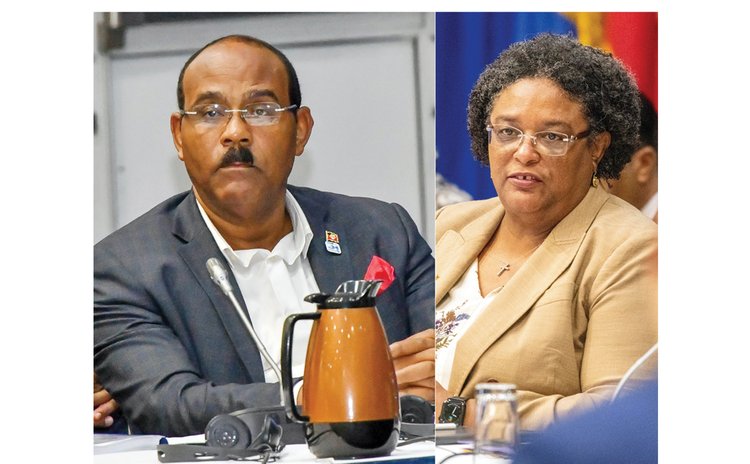 Dominica could be caught in the middle of a row between Antigua and Barbuda and Barbados over categorisation of COVID- 19 cases for travel purposes.

Bridgetown infuriated the authorities in St. John's when it first placed Antigua and Barbuda in the high-risk category early this month, before re-categorising it to medium risk as of 10 November, after the government of Antigua protested. Sister Caribbean Community (CARICOM) states, St. Lucia and St. Vincent and the Grenadines, along with Australia, Bermuda, New Zealand, have also been categorised as medium risk, which means travellers from these countries must present a valid negative result of a PCR test taken no more than three days before travel to Barbados.

The review of Antigua's status has failed to placate the Gaston Browne administration, with the foreign affairs minister, Chet Greene, threatening to take the matter before the CARICOM if the Barbadians failed to provide a reasonable explanation. With Greene seemingly not making progress, Browne wrote to his Barbadian counterpart, Mia Mottley, last Thursday, seeking justification for the "unwarranted classification" of his country "when the facts tell a quite different story".

The "facts" referred to by the Antiguan leader are that as of last Friday there were five confirmed active COVID-19 cases in his country, with a total count of 133 since the outbreak of the virus. This compares to 27 confirmed active cases here as of 11 November, yet Barbados has listed Dominica - along with Anguilla, China, Grenada, Montserrat, and St. Kitts and Nevis - as very low risk. People visiting Bridgetown from these countries do not need to produce a negative PCR test result and are free to move around the island as soon as they clear immigration.

Bridgetown has indicated in the past that how it categorises countries is guided by the level of infection and positivity rate over a seven-day period. The lead indicator was not immediately clear, but the UK – which continues to have Antigua and Barbuda, along with Barbados and Dominica on its travel corridor list of countries from which travellers do not have to undergo a 14-day quarantine - uses 20 cases per 100 thousand population over seven days.

These are similar to the criteria recommended by the Trinidad-based Caribbean Public Health Agency (CARPHA) when regional heads of government were considering a travel bubble, and referenced by Browne in his letter to Mottley.

"You will further appreciate our disquiet when Barbados departs from the position taken by CARICOM Heads of Government to apply the CARPHA standard of 20 active cases for a population of 100,000. In Antigua and Barbuda's case, we have only 4 [a fifth case was confirmed after the letter was written] infected persons, well below the threshold set by CARPHA," wrote the Antiguan leader.

If this formular were applied, Dominica's rate of active cases would jump to 37 based on a population of 72,053 according to the latest United Nations estimates. Antigua's, on the other hand, would be five, based on the UN's latest estimated population of 97,929.

The apparent inconsistency in the application of the formular by Barbados has raised questions other possible motives, such as the long-running squabble between the two countries over the moribund regional carrier, LIAT.

"I think that the issue regarding Antigua and Barbados, and indeed the issue between Antigua and St. Vincent has a lot more to do with the LIAT saga, and the fact that it has soured relations between the countries, and I think the leaders probably need to sit down and have a drink with one another at some state," political scientist, Peter Wickham, told The Sun. "But the reality is that the issue with this bubble and Antigua's relationship to the bubble and treatment by Barbados has a lot more to do with the deeper issue [that] relations between the countries are really not the best at this stage, and there's some work that needs to be done regarding improving those relations."

However, one person with close ties to the Roosevelt Skerrit government told The Sun Roseau was not worried that it could become an unintended victim of the row.

According to the person – who spoke on the usual condition of anonymity because he did not have the authority to address the issue – while Skerrit has made it clear he intends to continue investing in the terminally declining carrier, the prime minister respects Barbados' position on LIAT.

"I don't see any problem between us and Barbados regarding LIAT. I cannot see any fallout in that area," he said.

If Barbados were forced to apply the CARPHA-recommended criteria, Dominica could soon be placed in the medium or even high-risk category, dealing a critical blow to efforts by health authorities to control the spread of coronavirus.

The 27 active cases registered last week are higher than the total number of cases registered between 22 March, when the first case was discovered, and the reopening of the borders in mid-July, and a dramatic jump in infections since Skerrit announced in mid-May that the island had no active cases.

The rising numbers led the administration to make it mandatory to wear face coverings in public places, and to limit the size of public gatherings to 50, unless the police chief gives special permission to allow more. The new regulations affected last Sunday's football grand final between Bath Estate and Harlem, after the Dominica Football Association was advised on Friday night that no more than 200 people, including players, coaches and staff, would be allowed to attend the match.

However, it appears the new restrictions have failed to deter Dominicans who continue to flout the regulations. One person told The Sun that two days after the measures were announced, large parties were being held near the Roseau market and Windsor Park stadium.

"In a lot of areas people are not taking it seriously. That is why some people think we are lucky we have not had too many cases. There are still parties and people are without masks," said the person.