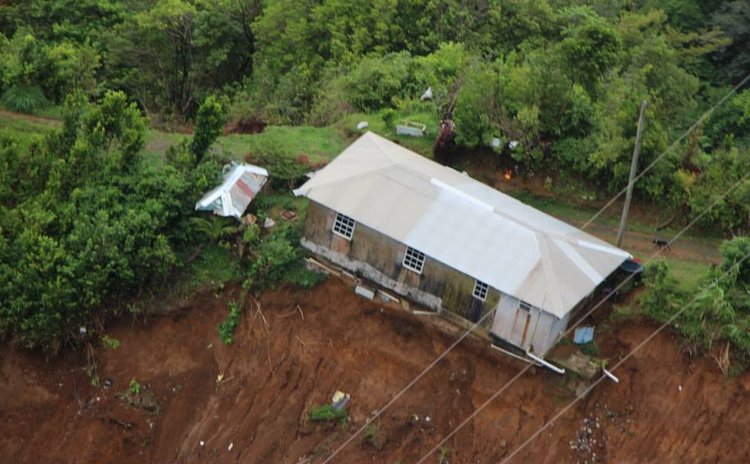 In the chaos, tragedy and trauma following Tropical Storm Erika, Petite Savanne was deemed unsafe and an emergency evacuation ensued.

In all, some 518 residents were evacuated. It was a voluntary evacuation; all evacuees signed consent forms to that effect. But a handful of persons opted to remain there.

Initially, most of the evacuees were housed at the Dominica Grammar School; others were put up at the Youth Centres in Grand Bay and Roseau while the elderly were placed at Mount Caramel.

With evacuees facing an uncertain future, it was the consensus of all interested parties that the best way forward was to relocate the residents in a safer location.

A Relocation Committee was formed to facilitate their resettlement in a new area, with due regard for their special needs and concerns.

This offer was put on the table at a meeting in September and the displaced residents filled out forms indicating their choices from the suggested relocation sites, or giving other preferences.

According to a source, most of the residents who had completed the forms indicated their preference to be resettled in the village of Warner on Dominica's west coast.

Despite these developments, up to press time the evacuees and the rest of the nation were still anxiously awaiting word on where the former Petite Savanne residents would be relocated and assisted to reestablish their community

However, Relocation Committee members declined to be interviewed and Parliamentary Representative for Petite Savanne Dr Kenneth Darroux could not be reached for comment.

Several thorny questions arise in relation to the relocation plan.

If private land is involved, were the owners consulted prior to the announcement of possible relocation sites? Will the landowners agree and cooperate? What compensation, if any, will they get?

Moreover; since the displaced residents would have owned lands of varying sizes in Petite Savanne, how will the sizes of plots be determined for allocation in the new community? And under what terms and conditions will land titles be issued?

Dr. Darroux told them that as soon as a consensus for a permanent location is reached, the sooner Government can act. Yet the mechanism for such consensus seems to have slowed down inexplicably.

One disgruntled evacuee, on his Facebook page, expressed his concerns about the longevity and financial viability of the temporary housing arrangement because Prime Minister Roosevelt Skerrit reported a significant drop in VAT collection.

The arrangements for housing remain unclear, except for Venezuela's donation of 300 PVC houses.

The Prime Minister had said earlier that Government was negotiating with several governments, donor agencies and private developers here and abroad to formulate designs and methodologies for long term housing solutions in community type settings.

He added that a geo-technologist is from Venezuela is doing feasibility studies at the sites identified for the permanent resettlement of the displaced people.

(Excerpted from a Summary of Damage and Response /Recovery Actions that was confirmed by the National Emergency Operations Centre (NEOC) as at September 15, 2015.)