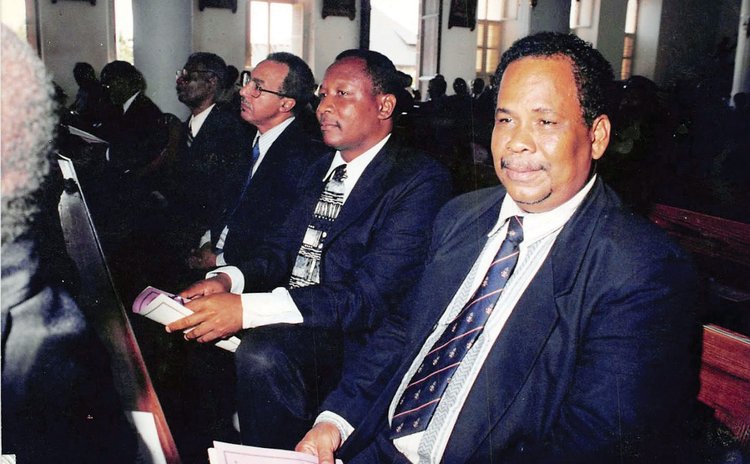 Luke Corriette,first in row, at an official function

Luke Corriette, a comrade, died without the comfort or presence of loved ones, alone as he faced the transition to the hereafter.

Memories of our service to our country is uppermost in my mind as I recall the youthful energy of this man who represented his people of Petite Savanne constituency with the electrifying Labour Party team of the mid 70's.

In our late 20's we met the challenges of the previous and post-independent Dominica.

We responded to the call to duty to save our country from mayhem and anarchy following the revolt of 29th May1979.

The revolts of the early 70's- 16th December 1971 and the events of 1973 which saw the demise of the father of Labour to abandon ship could have been a fleeting recollection of history by Corriette before his last breath.

Luke, I recall, joined with me to respond to the call of a nation for a solution to the constitutional crisis after a fleeing President and another President who was violently attacked by leaders of mobs and forced to resign and a Prime Minister coerced to resign with a country on the verge of armed anarchy and rebellion.

The support of Luke when the country suffered the worst category 5 hurricane with over 40 lives lost in the worst hurricane in history with the enormous challenges which we overcame in a short few months, restoring our country to normalcy, may have been thoughts which on the fleeting moments before death may have engulfed the mind of Luke Corriette.

The sparse means of survival as a humble JP which provided crumbs for his existence, which was confirmed to me by his brother, that he was the occasional source of assistance may have been the pain which could have been his last conscious thoughts that sincere service given led to attrition and dishonor. Luke you may have been overwhelmed that the party which grew upon shoulders of earlier leaders have seen the ascendency and dominance of aliens which may have left you bereft and in wonder…

Though forgotten and unknown, I recall our DBS interview of last November and although you became frail and unsure you did serve our country when we were most challenged and in need of leadership.

Farewell, Luke Corriette, may the angels carry you to the bosom of our Maker.

To your family and children may I remind them that despite the lack of acknowledgement as you expressed at our DBS interview you served in the leadership of our land when the test of manhood required the service of the best of us.

May you rest in peace.