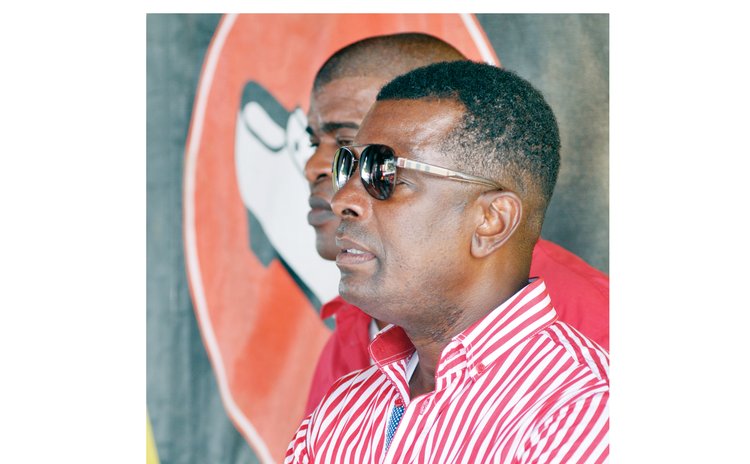 Birds of a feather- Dr. Henderson and Ed Registe

Opposition to Dr. Vince Henderson's nomination in Thursday's by-election in Grand Bay grows but the Eastern Caribbean Court of Appeal may have ruled on a similar case in 1997

In spite of a 1995 Eastern Caribbean Court of Appeal ruling in a similar case, the nomination of Dr. Vince Henderson as the Dominica Labour Party (DLP) candidate in this week's by-election in Grand Bay continues to be challenged. The voices are getting louder as the election gets closer.

For instance, the newly-formed National Joint Action Movement (NJAM) last week called for Dr. Henderson to be barred from the November 25, 2021, by-election in Grand Bay.

In a statement issued on November 19, 2021, the group says, it considers the behavior of Dr. Henderson an "insult" to the Dominican people and to the people of the United States of America (USA) and the Organization of American States (OAS), to which he was accredited as ambassador to represent the people of the Commonwealth of Dominica.

"Unconfirmed reports also indicate that the State Department still has Mr. Vince Henderson on its register of ambassadors accredited to the United States of America, up to this present moment," the group said.

NJAM issued a call to the DLP candidate to make public the evidence of his resignation and acknowledgment of the same in order to confirm that he did resign before Nomination Day on 9th November 2021.

NJAM further deemed Dr. Henderson's candidacy as "offensive, immoral and unethical" and appealed to "the God-fearing citizens of the Commonwealth of Dominica to join the proposed legal action against Mr. Vince Henderson to force him to present evidence that he is duly nominated as a candidate for the Grand Bay bye-election scheduled for November 25th, 2021; to prevent a crime

Leader, Lennox Linton, has formally written to the Chairman of the Electoral Commission, Duncan Stowe, also seeking to have Dr. Henderson interdicted.

Early Linton wrote to the Chief of Police Daniel Carbon but having received no response, he appealed to the constitutionally appointed authority with responsibility for conducting the elections to "to ensure that Mr. Henderson is barred from contesting the Grand Bay by-election in which he is not qualified to participate by operation of law."

Linton argued that the nation's Constitution and electoral laws prohibit anyone in the public service, and/or in a position of emolument in service to the State, from membership in the House of Assembly.

"Your investigation of this matter should therefore give very careful consideration to items 2, 5 and 8 on Form 13 of House of Assembly (Elections) Act Ch. 2:01 – Statutory Declaration of a Person Nominated as a Candidate for Election as a Member of the House of Assembly," Linton wrote.

He urged Stowe to act with urgency and the appropriate dispatch in "investigating and resolving this matter in the enlightened public interest of safeguarding the electoral process from criminality and rule of law violations."

The Sun tried contacting Stowe, to no avail, as the newspaper was informed that the Commission took certain actions after Stowe received Linton's letter. Meantime, Senior Counsel (SC) Anthony Astaphan has come to the defense of Dr. Henderson, deeming Linton's letters as baseless and another ploy by the United Workers Party (UWP) to raise funds.

According to the Astaphan, based on a ruling by the Court of Appeal in the 1997 Charles Savarin v John Williams matter, this form of disqualification only applies to public servants.

The case of 3rd July 1995 involved a voter's request for the court to disqualify Charles Savarin as the winner of the election in Roseau Central because, as the manager of the National Development Corporation (NDC), he was in the employ of the government and hence was automatically disqualified, according to the Constitution, from being a member of the House of Assembly.

But the Eastern Caribbean Court of Appeal disagreed.

A possible question for the courts, therefore, is whether Dr. Henderson's current situation is similar (or not) to Savarin's in 1997.