That's the big question: When Skerrit leaves who will take the seat of Prime Minister 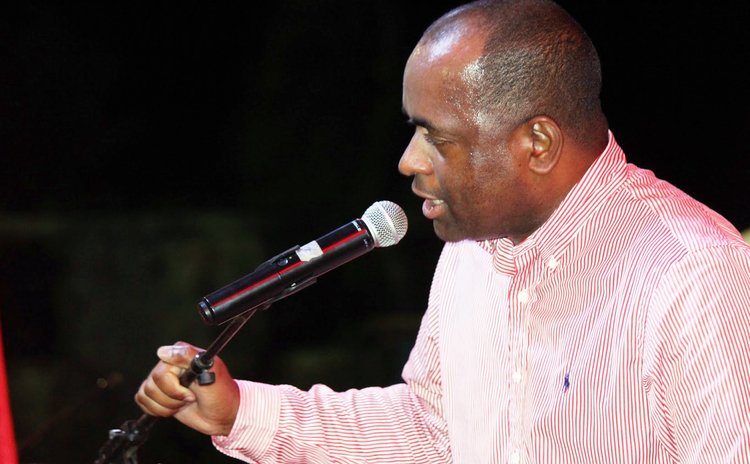 It could be Dr. Kenneth Darroux. Maybe Dr. Irving McIntyre. Could it be Reginald Austrie, or even the return of Dr. Colin McIntyre. The names of possible replacements for Roosevelt Skerrit as Dominica Labour Party (DLP) leader and prime minister are being pulled out of a hat dizzyingly as political observers and insiders speculate.

"Some people who are really close to this thing may say, 'what about his wife?', but that is a joke. His wife is not even a minister," one DLP insider told The Sun.

"There was a time I thought Dr. Mac [Colin McIntyre] would be the person but Skerrit replaced him in the last election . . . he's not in government," said another person who works closely with the party. "But I don't know, I really don't know."

Having indicated his intention to step down before the next general election, the question arises as to who is Skerrit's likely successor. This is not the first time that Skerrit, who became prime minister in 2004 at age 31, has promised to step down. However, one person close to him told The Sun there's reason to believe he's serious this time round.

"He's made it clear he's not running again but I don't know what succession plan he has in mind," said this insider.

Those close to the party, and with whom The Sun spoke, say the cupboard is bare, based on the current parliamentary make up. Therefore, one person with intimate knowledge of Skerrit's decision-making said, there's a likelihood Vince Henderson, the ambassador to the United States, and who for years was Robin to Skerrit's Batman, will step in when the time is right.

"His name came up quite frequently when questions of succession planning were going around and the belief was, he was expecting to just sit tight and whenever Skerrit was ready for him, he would insert him into a safe seat and he would move on," the person told The Sun. "That seems to be his expectation, and I believe that is an idea that Skerrit doesn't seem opposed to, especially as he's no longer in parliament in a way to present a threat, although I would have thought that if he was supposed to be a prospect that Skerrit would have tried to throw him in now."

Skerrit has spoken on various occasions in the past of his intention to quit, only to find reason to stay on as both DLP leader and prime minister. His clearest indication came at a meeting with Dominicans in Antigua in mid-2019.

"I have already made it very clear that this will be my last election as leader of the party. The transition is starting now and next time around it will continue with persons such as myself giving way to new talents, outlook and energy in the Dominica Labour Party," he said at the time.

More than a year later there appears to be no transition, any succession planning is far from evident and there's no evidence that anyone is being groomed to take over. At the same time, the old heads, such as Reginald Austrie, Rayburn Blackmore and Ian Douglas have failed to stake a genuine claim to the leadership.

This lack of planning isn't unique to Dominica, said Peter Wickham, the Barbadian pollster and political scientist. Wickham told The Sun that outside of Jamaica – where it was evident who the People's National Party leader-in-waiting was (from Norman Manley to Michael Manley to PJ Patterson, even down to Portia Simpson Miller) - and to some extent, Barbados where then prime minister, Owen Arthur appointed first Billy Miller then Mia Motley as his deputy – Caribbean leaders have a poor record of grooming their successors.

"I would say that Jamaica has been the South Africa of the Caribbean in the sense that it's the only country that has really pursued succession planning in any reasonable way," he said. "Dominica, as in most of the Caribbean countries, I don't really know that we have any strong traditional succession planning, and I don't know that there are many good examples outside of what happened in Jamaica."

This lack of clarity has left observers and DLP insiders scratching their heads, wondering who's best placed to run the country should there be an emergency that forces Skerrit to step down.

Crispin Gregoire, a long-time DLP member until he fell out with Skerrit, said short of Skerrit hanging on beyond this parliamentary term, Darroux – by virtue of his appointment as foreign minister - and Irving McIntyre – because of his handling of the COVID-19 pandemic – are best placed.

However, there are those who believe that Darroux lacks the political acumen and leadership ability to replace Skerrit, but that McIntyre, the health minister, has demonstrated competence during the crisis.

"If something happens to Skerrit overnight and somebody has to come in, it has to be Austrie because he's the one who has been acting, but long term, it has to be Dr McIntyre," said one person close to the prime minister. "He has shown himself to be a leader and I have no doubt, if that decision is to be made, most of the country, both those who support and against the government, will tell you it's Dr. McIntyre."